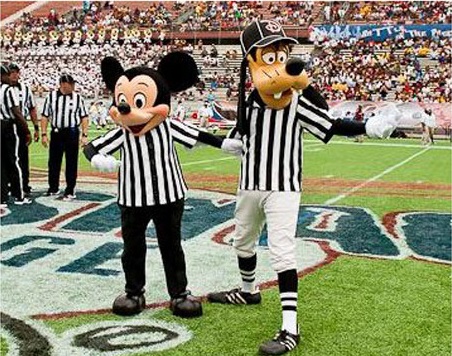 One of the things Disney does really well to support the community is to organize the MEAC/SCWAC Challenge – a college football game that pits two historically black colleges against each other along with additional events around the game. The ninth annual MEAC/SWAC Challenge Presented by Disney will feature the Florida A&M University Rattlers of the Mid-Eastern Athletic Conference (MEAC) against the Mississippi Valley State University Delta Devils of the Southwestern Athletic Conference (SWAC) at Florida Citrus Bowl Stadium on Sunday, Sept. 1. The yearly event, which features teams from two prominent Historically Black Colleges and Universities (HBCUs), brings approximately 20,000 fans to Central Florida over Labor Day Weekend for the start of college football season. ESPN will televise the game; exact times will be announced at a later date.

“As a proud supporter of Historically Black Colleges and Universities in the Mid-Eastern and Southwestern Athletic Conferences, Disney values our longstanding relationship with the African-American community and we continue to build on this with our sponsorship of the MEAC/SWAC Presented by Disney,” said Eugene Campbell, vice president of Domestic Minority Business Development for Walt Disney Parks and Resorts. “The MEAC/SWAC Challenge is more than just a football game – it’s a celebration for our whole community that underscores the importance of diversity and higher education.”

The annual game will be only the second meeting between the two storied programs – first meeting in 1990 (FAMU won 28-13). Florida A&M played in the 2007 MEAC/SWAC Challenge and was edged by Southern 33-27.

For Florida A&M, the game will mark the team’s first game under recently named head coach Earl Holmes. The Rattlers went 4-7 overall in 2012, while the Delta Devils ended the 2012 season with a 5-4 mark.

“I consider it an honor and a privilege to open my first full season as head coach at Florida A&M in Orlando at the MEAC/SWAC Challenge,” said Holmes, a FAMU graduate who previously served as defensive coordinator. “The central location in the state will allow Rattlers from across Florida to converge on a place that they are familiar with. We focus our recruiting in the state, so we expect parents, families and friends to support the student-athletes.”

Karl Morgan, Mississippi Valley State’s head coach since January 2010, shares Holmes’ enthusiasm. “I’m very excited our team will have the chance to open the season on ESPN against Florida A&M,” Morgan said. “To play on national TV two years in a row is huge for our program. We can’t wait to get to Orlando.”

Several additional events will take place around the game, including a high school career panel and a special “Fan Day” celebration at Walt Disney World.

“We are thrilled to have Florida A&M and Mississippi Valley State in this year’s MEAC/SWAC Challenge Presented by Disney,” said Pete Derzis, senior vice president and general manager, ESPN Regional Television. “Being in our ninth year, we are still focused on our mission, which is to build on HBCU traditions, while providing a stellar experience for the student-athletes and fans alike. This matchup gives us great momentum as we look down the road to our tenth anniversary in 2014.”

Tickets for the 2013 event will go on sale early summer.