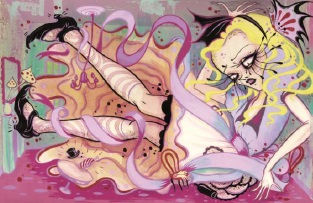 Since its publication in 1865, Lewis Carroll’s Alice’s Adventures in Wonderland has been re-interpreted visually in a wide-range of artistic styles and media, including as an animated Walt Disney film in 1951. Over half a century later, Garcia has updated the enduring classic with her distinctive illustrations that capture a young girl’s surreal adventures after following a rabbit down a hole. In this exhibition of Garcia’s book illustrations, Alice’s encounters with the White Rabbit, Mad Hatter and Red Queen are quirky renditions of the main characters set against colorful backdrops. With her conscious disregard for perspective or scale in her compositions, Garcia creates a fresh and contemporary depiction of the dreamlike story. Her illustrations not only draw from a Goth sensibility, but also the thriving “low-brow art” movement in Los Angeles and its references to classic cartoons, 60’s TV sitcoms, rock music, and comic books. However, in keeping with Lewis’s intended audience, the illustrations retain the animation quality of the Disney film that continues to appeal to all generations.

Credited with introducing modern art to the Disney studio, Mary Blair’s work was very adventuresome for the time period (1940s and 50s) in her use of asymmetrical shapes to illustrating animals that created more dynamism and visually compelling scenes. Of the many films she contributed to, it was Alice in Wonderland that bears her influence as an artist in its bright colors and ability to create imagery that was all-encompassing, with the ability to visually entice audiences into entering magical worlds.

“Blair and Garcia may have half a century separating them, but they both were carving out new territory. Blair was one of the few women in the animation business; her position a credit to Disney’s foresight. Garcia’s aesthetics have pushed illustration further into the art world and brought it to the attention of a new, younger generation,” says Romo.

As Garcia stated in an interview with the Los Angeles Times in 2010, “The original John Tenniel illustrations were always some of my favorites and those were definitely lodged in my head. I wanted to stay true to his vision but I’m so influenced by Disney. I loved the backgrounds in their early movies (Snow White and the Seven Dwarfs and Pinocchio) so I watched a lot of those films to try to get more of a color feel. They were all done in the 1930s with watercolor, which has that very classic touch. Using watercolors referred back to the Tenniel work, but I added a little bit of a modern gothic touch as well. That was my vision for the work.”

“I always liked the themes of Alice and playing with the idea of landscape being somewhat surreal, cartoonish, not totally based in reality. The story lends itself to the kind of work I do anyway. The sort of shifting of realities,” Garcia continued.

Camille Rose Garcia was born in 1970 in Los Angeles, California. The child of a Mexican activist filmmaker father and a muralist/painter mother, she apprenticed at age 14, working on murals with her mother while growing up in the generic suburbs of Orange County, often visiting Disneyland where she would derive inspiration. Her works blend nostalgic pop culture references with a satirical slant on modern society.

Garcia received her Master of Fine Arts degree at University of California at Davis in 1994 and her Bachelor of Fine Arts from Otis College of Art and Design in 1992. Her work has been displayed internationally and featured in numerous magazines including Juxtapoz, Rolling Stone, and Modern Painters, and is included in the collections of the Los Angeles County Museum as well as the San Jose Museum of Art, which held a retrospective of her work, Tragic Kingdom, in 2007.

An imaginative color stylist and designer, Mary Blair helped introduce modern art to Walt Disney and his studio, and for nearly 30 years, he touted her inspirational work for his films and theme parks alike. Animator Marc Davis, who put Blair’s exciting use of color on a par with Matisse, recalled, “She brought modern art to Walt in a way that no one else did. He was so excited about her work.”

Born in McAlester, Oklahoma, in 1911, Blair won a scholarship to Chouinard Art Institute in Los Angeles. After graduation in 1933, at the height of the Depression, she took a job in the animation unit of Metro-Goldwyn-Mayer (MGM) rather than pursue her dream of a fine arts career. In 1940, she joined The Walt Disney Studios and worked on a number of projects, including the never-produced “Baby Ballet,” part of a proposed second version of Fantasia.

In 1941, she joined the Disney expedition that toured Mexico and South America for three months and painted watercolors that inspired Walt to name her art supervisor on The Three Caballeros and Saludos Amigos. Blair’s unique color and styling greatly influenced many Disney postwar productions, including Alice in Wonderland, Song of the South, Make Mine Music, Melody Time, So Dear to My Heart, The Adventures of Ichabod and Mr. Toad, Cinderella, and Peter Pan.

In 1964, Walt asked Blair to assist in the design of the it’s a small world attraction. Over the years, she contributed to the design of many exhibits, attractions, and murals at the theme parks in California and Florida, including the fanciful murals in the Grand Canyon Concourse at the Contemporary Hotel at the Walt Disney World Resort. Blair died July 26, 1978, in Soquel, California.

The Walt Disney Family Museum presents the fascinating story and achievements of Walt Disney, the man who raised animation to an art, transformed the film industry, tirelessly pursued innovation, and created a global and distinctively American legacy. Opened in October 2009, the 40,000 square foot facility features the newest technology and historic materials and artifacts to bring Disney’s achievements to life, with interactive galleries that include early drawings and animation, movies, music, listening stations, a spectacular model of Disneyland and much more.