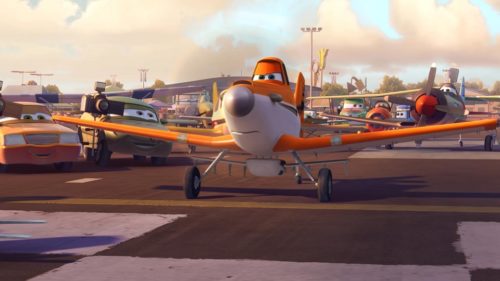 Originally set to be released as a direct to video ‘in the world of’ sequel, Planes was elevated to a full theatrical release after Disney saw the potential of the story and the quality of the animation (and don’t forget the huge potential for toy sales). There have been a number of films where Disney made this decision. Two that come to mind immediately are Toy Story 2 and Peter Pan: Return to Neverland. Both pretty good films in my book.

Based on the trailer here, I suspect Planes will do better than ‘Neverland’ at the box office and a lot better in toy sales.

From above the world of “Cars” comes “Disney’s Planes,” an action-packed 3D animated comedy adventure featuring Dusty (voice of Dane Cook), a plane with dreams of competing as a high-flying air racer. But Dusty’s not exactly built for racing—and he happens to be afraid of heights. So he turns to a seasoned naval aviator who helps Dusty qualify to take on the defending champ of the race circuit. Dusty’s courage is put to the ultimate test as he aims to reach heights he never dreamed possible, giving a spellbound world the inspiration to soar

In addition to the trailer, it was announced last week that comedian Dane Cook will provide the voice for Dusty, the main character in Disney’s Planes! Cook takes over for Jon Cryer, apparently the expansion of the film from home video to theatrical released caused them to want to take the Dusty character in a new direction. Not unheard of in animation. I’m sure there will be some good Jon Cryer outtakes on the DVD. Actually, you can hear Cryer as Dusty here in an earlier version of the trailer.

I do think it’s interesting that ‘Pixar’ isn’t in the title, despite the obvious fact it’s set in the world of Pixar’s Cars. This sort of animation blending is something I know Pixar worried about before they were bought by Disney. We’ll have to see how it holds up. Disney is apparently so high on the film that they’ve already put two sequels into production.

I hope the film does well. It has the advantage of leveraging the world of Cars that Pixar’s team so wonderfully realized. See Disney’s Planes in theaters August 9!