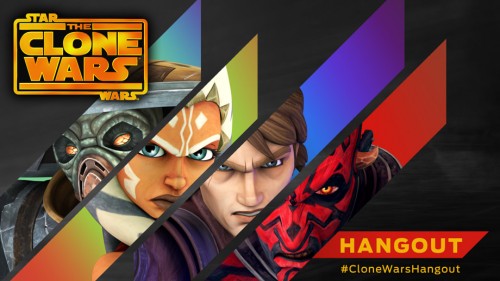 Don’t let anyone tell you that Star Wars The Clone Wars animated series on Cartoon Network is just for kids. It’s been a great extension of the brand for the last few years, a little off canon from time to time, but a fun romp through what admittedly episodes 1-3 should have been about.

The next episode of The Clone Wars features Obi-Wan Kenobi, Duchess Satine, Darth Maul, Savage Opress, and another certain Sith Lord. It promises to change the show forever. To mark the occasion, Lucasfilm has announced the first The Clone Wars Google Hangout — the first ever official Star Wars Google Hangout — taking place this Saturday, February 2, at 10:30 a.m. PST. Featuring The Clone Wars supervising director Dave Filoni, Matt Lanter (Anakin Skywalker), Ashley Eckstein (Ahsoka Tano), and Sam Witwer (Darth Maul), fans will get the chance to connect with the cast and creators of the hit series like never before. You’ll also get an exclusive first look at an upcoming episode of The Clone Wars, “Sabotage,” along with a promised surprise or two.

Fans with Google+ profiles can RSVP for the event now; hashtag #CloneWarsHangout will be used to ask questions and interact live during the Hangout. Lucasfilm’s own Pablo Hidalgo and Hollywood.com’s Christian Blauvelt will moderate the discussion, and a live stream of the event will be open to everyone at youtube.com/starwars.

Watch “The Lawless” this Saturday at 9:30 a.m. on Cartoon Network, and then join the The Clone Wars Hangout to get your questions answered. Are you excited? Are you hoping The Clone Wars will move to Disney XD next year?