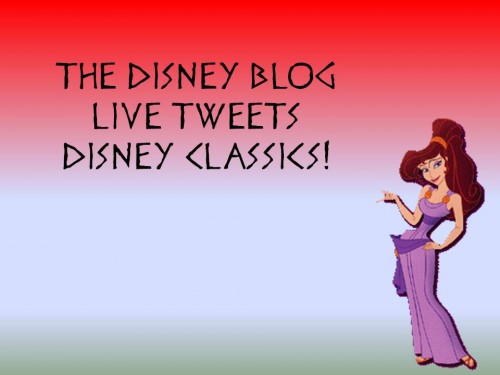 Speaking on behalf of all of January’s live tweeters, we had a great time! We made jokes, we made observations, we made some more jokes, and we re-tweeted the heck out of each other. I couldn’t wait until this month, and there are some changes to the format, so let us get started!

TDB Master Tweeter for this month was @hayleythehatter on twitter (She has a great tumblr too, check it out!) and her nominees were two recent films…

The Princess and the Frog and Tangled!

Which is your favorite? Write a comment below with your choice on which one you would like to tweet during. Voting will end Monday, February 4th at 3pm Eastern, which gives you less than a week to vote. Last time we had a long time with no votes, so I thought we should shorten it to get to the viewing faster. That day, the winner will be announced and we will view the film on Friday, February 8th at 9pm Eastern. That gives you 4 days to pick up a copy for viewing, which is shorter, but I am assuming that most people who read this blog have a lot of Disney films at home already :) (If this turns out to be a smaller showing, I will change the dates accordingly for March).

The night of the live tweet, we will once again use a hashtag I will announce once we pick a winner. Last time, I used Tweetchat, which shows a live stream of all the people using the hashtag. It was a great little tool and very easy to use.

We will once again have a TDB Master Tweeter, who is the person with my favorite tweet(s) of the night. They will pick the nominees for March. They might even get a special surprise for winning this time around :) Stay tuned for that!

Also, look out in February for some non-movie live tweets. I know what you are thinking…non-movie?! Are you insane?! The answer…yes, but I think we can still have fun. I want to have a night where we all watch Finding Nemo the Musical on YouTube and tweet, so look forward to a date for that. Also look for some TV live tweets coming up. For announcements and all other info on live-tweets, make sure to follow me on twitter (@Marshal_Knight) and the blog (@thedisneyblog) for up to date information.

Summary: You have until Monday, February 4th at 3pm Eastern to vote for your favorite nominee to watch, the live tweet will be Friday, February 8th at 9pm Eastern using a hashtag given out at a later date, and another TDB Master Tweeter for the month will be announced. Don’t forget to vote and until next time…Have a Magical Day!

Looking to rent the winning film for the live tweet session? You can use Netflix and find non-stop kid-friendly shows just $7.99 a month. Plus your purchase helps support The Disney Blog. Thank you.