The Taste Debuts on ABC 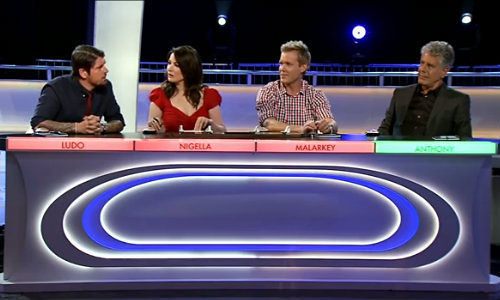 Last night ABC premiered its entry into the the cooking wars reality TV show genre. The Taste is a combination of Chopped, The Voice, and Master Chef. The Voice you say? Yep, because it’s a blind taste test. Just like the coaches on The Voice only hear the voice before they vote, the judges on The Taste have to lock in their vote after tasting just one spoonful and without seeing the chef.

The judges, of course, are no-holds barred chef and writer Anthony Bourdain, British food star Nigella Lawson, expert chef/author Ludovic Lefebvre and chef/restaurateur Brian Malarkey. I liked that the show let the judges express themselves, complete with bleeped out words.

The show’s producers did a good job picking a mix of home cooks, personal chefs, caterers and executive chefs. Part of the fun is watching the judges work out as much as they can about the talents of the chef before they look in their vote.

Again, like The Voice, the judges are building a team of chefs that they’ll mentor before another round of blind taste tests (where they could vote against their own candidate). So there was also a bit of pressure on the judges to choose wisely.

The judges had an odd habit of being lenient on dishes they felt came from their wheelhouses and extra critical from dishes they felt were doing too much – often from professional chefs. They all had issues with commitment. This will be interesting to see as they have to work with the home cooks to build a strong team.

As they say in Pixar’s Ratatouille anyone can cook, but not everyone should cook. Cooking shows like this are both the proof and the exception to the rule. That’s the suspense of The Taste. Will the eventually winner be a highly trained chef or a home cook with some raw talent?

I’ll definitely be adding The Taste to my DVR’s season pass. What about you?