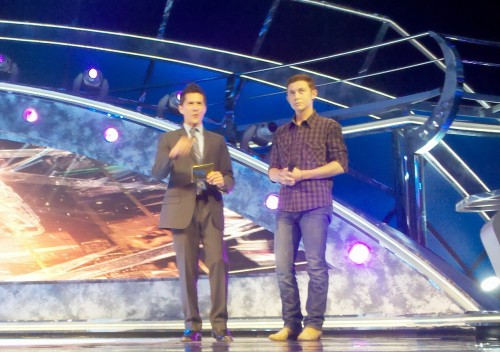 I’ll admit that I’m a casual fan of American Idol, okay maybe more than a casual fan. There’s something wonderful about a rags to riches story. Yes, I know that the story is heavily scripted by producers and, yes, I know that this season’s choices of judges is making it very hard to watch, but I look at the screen and see the possibility that anyone with the right stuff can make it.

I even like the American Idol Experience show at Disney’s Hollywood Studios. It gives a wider range of talent the opportunity to shine on stage and gives them a chance to meet with producers of the TV show if they win the daily finale. That helps build the suspense for sure. Yes, it’s basically well staged Karaoke, but it’s a great way to spend an air-conditioned half hour if you’re at the park.

With the roll out of the new American Idol season, the American Idol Experience show has expanded the number of songs it offers. The new songs include many songs from past idol winners along with some frequently requested contemporary country hits.

That brings the total number of songs available for auditions to 158.

Another reason to like the show is that it has started sending some real talent to the actual TV show. Last season, many of the Hollywood contestants were dream ticket holders including five contestants who made the final 13.

Are you a fan of American Idol Experience?