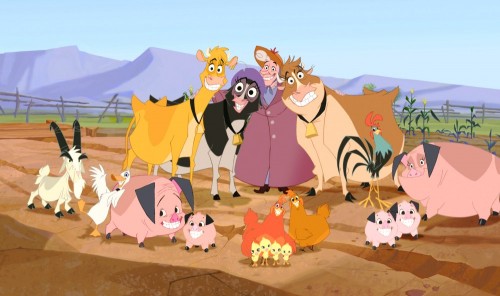 Home on the Range is often regarded as one of the worst Disney Films of all-time. Whether it be the constant physical(ly drawn) comedy or the animation style, many watch it and leave with a bad taste in their mouth. The one redeeming quality of it is the music. Songs by k.d. Lang, Tim McGraw, and the incomparable Bonnie Raitt line the CD with music that make you tap your toes and warm your heart. The movie, unfortunately, outweighed the soundtrack. The same happen with Fox and the Hound 2, the direct to DVD sequel. Incredible talent is on the soundtrack (Reba, Little Big Town, etc), but the crappy movie cancels it out. The theme I am trying to get to? Disney needs to make an animated film with Country music again.

Now, they have had a few success, with Oh Brother, Where Art Thou (the film they distributed that ended up winning Best Album at the Grammy Awards) and Nashville (their new hit show on ABC with a killer soundtrack with songs written by one of my favorites, Kacey Musgraves)…but those are live-action ventures. The only success they have received is via Rascal Flatts‘ Life is a Highway on the Cars soundtrack, which was uber-popular.

I am a Country fan, heck, a huge Country fan, but it has shocked me that Disney has tried a little more. Home on the Range’s CD could have done so well if the movie turned out popular. I wrote an article a little while ago about how My Peoples should be reexamined, which would have been a movie with a folk soundtrack, hopefully written by the proposed star, Dolly Parton. Could you imagine the musical genius?! A classic Disney animated musical with music by the Legendary Dolly Parton? I would be going to the CD release party right after seeing the film.

I realize not everyone likes the genre, but some songs and artists have crossed boundaries, like Carrie Underwood and Shania Twain. So, if they had the right film and the right person, they could make millions on the movie and the CD. Country music is as popular as ever (with the folky side of it also becoming more and more popular thanks to the talent of people like The Civil Wars) so why NOT try to incorporate it into their films?

Do you like Country music? Would you like to see a Country Disney film? Could you imagine Little Big Town doing a Disney movie?!? Let me know in the comments below! This is the article that I have been most interested in the different opinions on my thoughts, so let me know! Until next time…Happy Holidays and Have a Magical Day!

(P.S. When I have mentioned a singer, I have linked some of their songs so you could get a feel for what a film with Country music would be like! Let me know in the comments what was your favorite song that I linked!)

previousHappy Halloween – Remix
nextChristmas is great…but why isn’t Easter at the parks?!