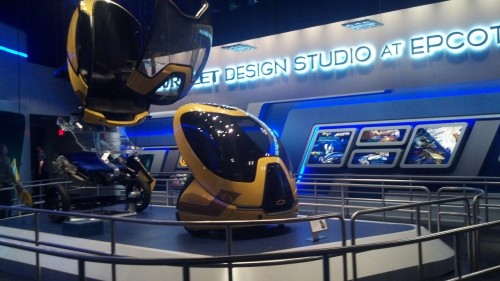 I don’t play a lot of video games, not because I don’t like them, but because my personality is such that once I start playing I have to finish it and end up obsessing about the game over other important things until I conquer it. It’s a problem when I have things to do like work or writing a blog. John Gaudiosi doesn’t have that problem as it’s his job to play games and write about them for great publications like GamerHub.tv and Forbes.

Gaudiosi brought his unique perspective to Walt Disney World for the recent re-opening of Test Track where he spoke with Imagineer David Hardiman, who is himself a gamer, about how Video Games affected the design of Test Track.

“As a gamer from my own childhood and parents of teenagers who game, we realized that there’s a strong desire in our park-going public now to enjoy interactives wherever they can,” said Hardiman. “So we’ve added short-range RFID association with guests where they will basically take a room key and associate their designs with a database. That will allow us to pull their design up later for them to see on the attraction, as well as interact with in the post-show.”

More perspective on Disney’s recent expansions from GamerHub.TV over on Forbes.