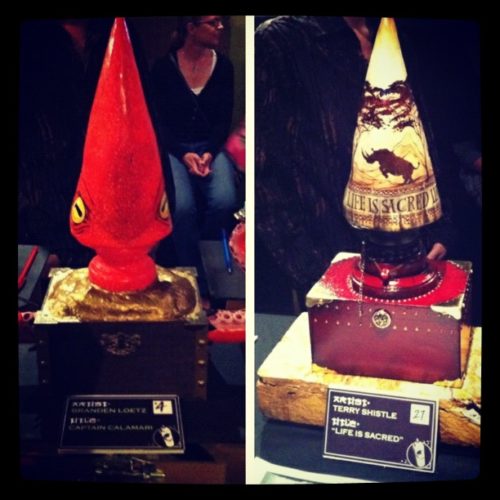 Rhinoceroses have been hunted to the point of extinction for the value of their horn on the black market. One Disney Animal Keeper is turning that perceived value into a plus, and raising money by creating works of art that represent the Rhino Horn.

Chad Harmon works as an rhinoceros keeper at Disney’s Animal Kingdom where he tends to some of the toughest, strongest animals on the planet. His Horns to Heroes project used one of the rhinos he cares for as a model to make 40 horns by hand using a process known as rotational casting. The pieces are made of foam-filled resin and stand 16 inches tall and 7 inches wide.

He then recruited Central Florida painters, tattoo artists, sculptors, graffiti artists, illustrators, photographers and special-effects artists to create original and unique works of art. Each one was auctioned off with proceeds benefiting the International Rhino Foundation which funds research programs and helps protect threatened rhino populations in Africa and Asia. The arts auction raised approximately $6000 for the endangered animals.

“By supporting the International Rhino Foundation, The Horns and Heroes Project will help fund programs that support the courageous and dedicated rangers who risk their lives to stop poaching and give rhinos a chance at survival,” said Harmon. “We’re hoping that these works of art will help spark more conversation about how to protect these species.”

Though at one time there were 30 living species of rhino, only five species remain today, and those populations are facing the severe threat of extinction. Without immediate action, some rhinos could be extinct within the next 20 years, due to poaching, forest loss, habitat conversion and encroaching human settlements.