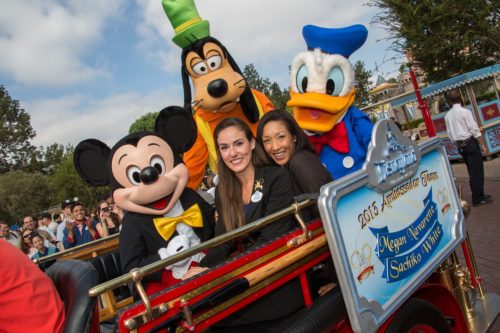 To become a Disneyland Ambassador is a great honor for any cast member. It’s a tradition that goes back to 1965 when Walt Disney himself selected the first Ambassador, Julie Reihm, to help with community awareness and media interviews. The ambassador represents the 23,000 other cast members and the resort as they make public appearances, help emcee ceremonies, and conduct media interviews. While the tradition started at Disneyland, today there are Ambassadors at every Disney Park around the world.

In a ceremony earlier today in front of Sleeping Beauty Castle, Disneyland Resort President George A. Kalogridis announced that cast members Sachiko White and Megan Navarette are the next to earn the honor.

“Sachiko and Megan are well deserving of this prestigious honor, and will do a tremendous job representing the Resort and our 23,000 cast members,” said George A. Kalogridis, president of the Disneyland Resort. “After a rigorous training and interview process, the pair has demonstrated the depth of their Disney knowledge and passion for being a Disney cast member, and we look forward to their community outreach efforts over the next two years.”

White and Navarette were selected from nearly 80 applicants, and will spend a two-year term taking the magic of the Resort into the community by acting as emissaries of goodwill. As part of their full-time duties, they will represent the Resort at a variety of events, such as hospital visits with Disney characters, special promotions, and cast recognition ceremonies. In addition, the pair will serve as spokeswomen for the Resort, as well as host dignitaries and other VIPs. In 2011, White began her Disney career as a performer for special events and scripted shows at the Disneyland Resort. A graduate of Queen Margaret University College in Edinburgh, where she received an acting degree, White also completed improv-comedy training at The Second City Los Angeles. She currently fundraises for Hollywood Arts, an academy that offers at-risk and homeless youth visual and performing arts classes to inspire the development of self-esteem and critical life skills. White resides in Anaheim.