Aulani Turns One and Reveals New Details for Expansion

It was one year ago today that Aulani Spa & Resort in Hawaii opened its doors to paying guests for the first time. Word on the street is that while it hasn’t been banner year Disney was hoping for with their first DVC/Hotel combo property, they still feel it’s salvageable.  That’s one of the reasons they recently announced some changes to the amenities at the hotel. Today we got more details on exactly what those changes will be.

The word came from Joe Rohde, the Imagineer who oversees the design of the resort. According to Rohde, the water features will be expanded to include a themed family pooh with a misty grotto perfect for a relaxing swim or a view of the sunset. At night, special effects will light up the grotto with a magical starscape of glimmering lights. 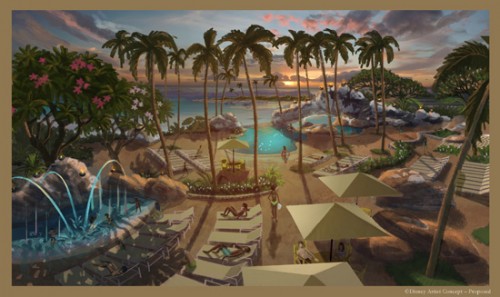 They will also be adding a kids splash zone themed to resemble tidal pools. The zone will feature rainbow water jets, images of tidal pool creatures on the pool floors, and hidden Menehune – which are featured around the resort. Adults will be happy to have additional deck space, chairs, chaises and cabanas to relax in while their kids enjoy these new water features.

Aulani is also building two new food service locations. The one located near the new water play area will serve continental breakfast and offer a lunch and dinner menu with a selection of sandwiches, salads and snacks all with a beautiful ocean view. The second location will be a much needed quick-service eatery. You’ll have to go beachside, to get your snacks, but that’s also been a request of guests relaxing on the beach.

Look for construction to start in September and conclude mid-2013 in time for the final build-out of the resort. The resort will also be adding a larger lawn location for events, weddings and the guest-favorite nighttime Starlit Hui show.

These all sound like great changes to the resort. However, I’ve heard nothing about the biggest change they need to make — lowering the price. At rack rates starting over $400 a night for the low end room with no view they seem to have priced themselves out of the market. The Marriott next door can often be had for half-that (or less, if you’re a Marriott club member).

previousInterview with Page Pierce, VP at Disney’s Golden Oak Development
nextHurley Bird Flying Back to ABC, Jorge Garcia to Guest on Once Upon A Time