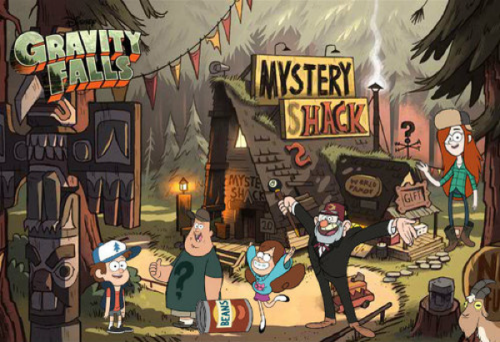 A terrific interview with Alex Hirsch, the creator of Disney Channel’s new cartoon – Gravity Falls, over on BoingBoing. The show features stories built around the sort of eclectic mix of the odd and weird that make up the central mystery of each show. I grew up in the Pacific Northwest and a lot of the ideas behind Gravity Falls are not that strange to me. Here’s the basic plot:

Twin brother and sister Dipper and Mabel Pines are in for an unexpected adventure when they spend the summer with their great uncle in the mysterious town of Gravity Falls, Oregon, in the Disney Channel animated comedy “Gravity Falls.” Upon their arrival, Dipper and Mabel’s huckster great uncle, also known as Grunkle Stan, enlists the siblings’ help in running The Mystery Shack, a fun tourist trap he owns that overcharges unsuspecting customers. Although Dipper and Mabel quickly discover The Mystery Shack itself is a hoax, they sense there is something strange about their new town and together they begin to unlock the secrets of Gravity Falls.

What is that hat Grunkle Stan wears? Does he ever take it off?
Like all cool people, Stan wears a fez pretty much constantly. According to legend, it gives him special powers, like the ability to cover his bald spot, and a place to hide his parking tickets. He bestows the fez upon Mabel in a future episode, and she learns of its awesome responsibility…

Read the rest of the interview at BoingBoing.