I started blogging personally back in 1999. I didn’t call it blogging then, it was online journaling. The thought was that the internet and related technologies would eventually be the network that controlled the details our friendships, our businesses, and even our private lives. Therefore the best thing to do was to get out in front of it and publish your life on line with a site I called “You Are Your URL.” Not as catchy as Weblog, as it turns out.

By 2004 blogging had gone mainstream. I had been writing for LaughingPlace.com about Disney for 5 years, and on USENET since 1992. But as I looked around, I couldn’t find any blogs devoted to Disney, so I thought, why not me. And thus The Disney Blog was born.

I thought I’d only be doing it for a few years before The Walt Disney Company would get in the game with an official blog and push me out of business. But that never happened. First, fan writing and official news can, and do, co-exist. Second, Disney may have used blogging technologies internally, but they resisted doing anything external.

Then, in the summer of 2008, I get word that Walt Disney World is working on a blog for the parks. Knowing a couple of the people involved, I gave them some words of encouragement and a few tips, and was more than pleasantly surprised with the success of the program.

Since then Disney has really taken to social media in a lot of ways. They may still be perfecting the ‘social’ part, (Disney legal sets some strict limits) but they understand the nature of community and storytelling inherent in social media, so on the whole I have to give them a good rating.

It’s taken nearly three years since the Disney Parks blog launched, but I’m happy to see that today the Walt Disney Company finally launched an official corporate blog – The Disney Post. It’s not much right now, but it has so much potential. Better late than never, as they say. I wish the team behind it all the success in the world. 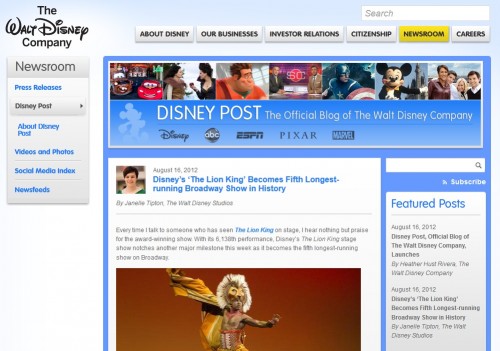 Note: while you’re at the Disney Post, check out their Social Media Index. It’s near inclusive list of all the social channels used by the main divisions of The Walt Disney Company. A very handy tool.

The community of Disney blogs has exceeded my dreams of 2004 in so many ways. But I’m proud to say that for the most part we remain a congenial, cooperative, group who are happy to share credit when its due and links even when we don’t have to. I firmly believe a rising tide lifts all boats and want to see even more Disney blogs added to the mix in the future. Also, I hope that Disney’s official blogs will one day join the same ecosystem as their fans and join in the fun. I promise we will welcome them with open arms.

I can’t end this article without a big thank you to all of you reading this post right now. I really appreciate your support. It’s been an amazing eight-plus years and I look forward to many more.