Country Bear Jamboree to get the Tiki Treatment 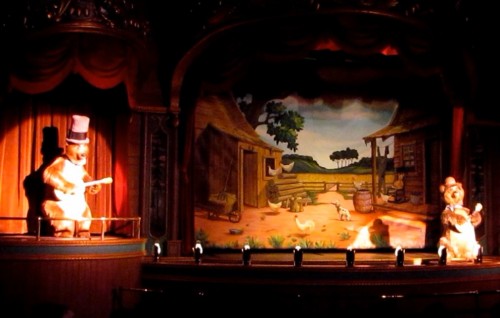 The Magic Kingdom’s Country Bear Jamboree show is about to get the Enchanted Tiki room treatment. Apparently, modern audiences won’t sit still for the 15 minute show length. The show is scheduled to go down for a refurbishment on August 22nd and the rumor is that they’ll be shortening the show by 4 to 5 minutes to meet this new attention span. Where Tiki Room lost the sedate Offenbach segment, the main segment rumored to be removed is the cruder “Mama don’t shoot little Buford” song, which many feel reflects poorly in a modern society more concerned with child abuse than they were in the 70s.

I’m of two minds about this. I’ve long been an advocate for updating Country Bear Jamboree to include a few more songs (even if they lift them from the other versions of the show), but then add a bit of randomness to the performances you see each show. I think shortening the show is fine, might even increase the capacity a bit. The other side of me says that there’s a lot to said for the talent and vision of the original Imagineers who created this comic masterpiece. Why mess with success?

In case you can’t make it out the the Magic Kingdom before the 22nd, here is the full Country Bear Jamboree show as filmed on July 28, 2012.

Will you be more or less likely to stop in and pay a visit to the Country Bears if the new show is shorter.

previousFree WiFi at the Magic Kingdom
nextVideopolis: Multitrack Acapella “When You Wish Upon A Star”