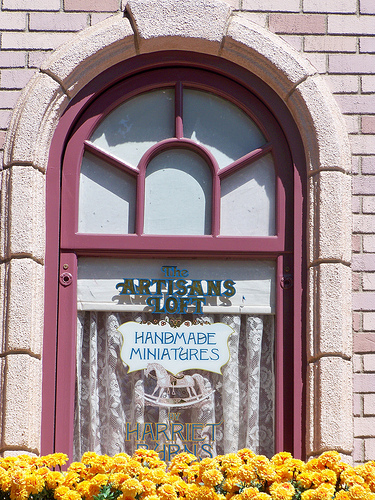 The arts, crafts, and traditions that built Disneyland may have created something totally new, but they were rooted in film making. In fact, Walt poached employees from studio art & set design departments across Hollywood to make sure his vision was realized. It followed that workers who were used to seeing their names roll by on the screen in the movies they worked on would like to see their names added on Disneyland’s credits. Thus, the Windows on Main Street were born.

But what were those initial windows like in 1955. Believe it or not, no one has taken up that cause, until now. Todd Pierce at the Disney History Institute has turned his considerable detective skills to reconstructing not just the history of Disneyland’s original credits, but some of the mysteries as well.

I knew that the Main Street Bank windows were old and dated back to an early portion of the park’s history, perhaps even opening day. But beyond that, I had very little idea as to when the other windows appeared. There was one quote by Marty Sklar that I’ve always wondered about: “The tradition [of the tribute windows] was established by Walt Disney for Disneyland Park. He personally selected the names that would be revealed on the Main Street Windows on Opening Day, July 17, 1955.” Until this week, I’d assumed he was referring only to the Bank windows. But I was wrong.

Read the whole post; I hope he continues to expand on this fascinating piece of Disneyland’s history.