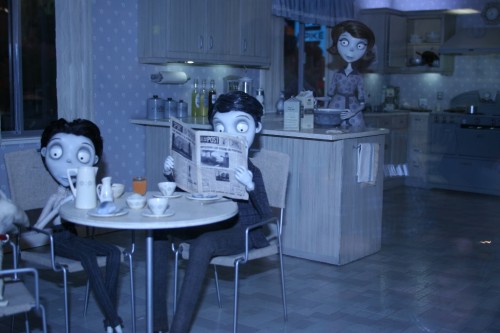 Tim Burton’s Frankenweenie was of the big hits of this year’s Comic-Con. The special exhibit of art and production materials from the film and the HGTV Electrifying Garden erected by Disney to promote the film drew large crowds. There appears to be a large appetite for the humor and art involved in Burton’s unique style of stop motion film making. Good news for the film, which hits theaters Oct 5th.

The Art of Frankenweenie Exhibition featured sets, props, and figures used in the production of the film. The Exhibition tour still lists stops at Mexico City’s Plaza Universidad (July 27-August 7), Toronto’s Fan Expo (August 23-26), Disney California Adventure Park (September 14-November 5), Madrid (September-October), London (October), Paris (October-November) and Tokyo (December). If your city isn’t on there (where is Orlando, I ask?), you can follow the tour (and take a virtual visit of the Exhibition) at facebook.com/Frankenweenie.

The HGTV Electrifying Garden is also scheduled to make an appearance at Disneyland Resort later this year.

Tons of great photos and more details over at the always excellent LaughingPlace.com.