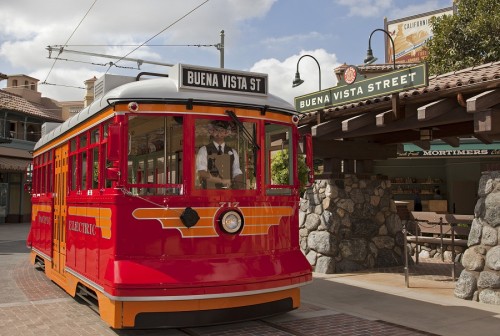 A new show that takes place on Buena Vista Street in the newly relaunched Disney California Adventure brings guests back to the Walt Disney creation story via his creation Mickey Mouse. When Walt moved to Hollywood in 1923 he had $40 in his pockets and the clothes in his suitcase and that was it. But he soon parlayed his dream of opening Hollywood’s first animation studio into the Disney Brother’s Studios and the rest, as they say, is history.

Although Mickey Mouse wasn’t created until about 4 years after Walt moved to Hollywood and after he learned another hard business lesson, Mickey is featured in “A Suitcase and a Dream” with the Red Car News Boys.

I like that DCA’s entertainment features a show that harkens back to Walt’s arrival story. It’s hard to tell from this short excerpt, but the choreography doesn’t look all that inspired. When I see a Newsie, I’ve come to expect large leaps and energized dancing.

Has anyone seen the full show? What did you think?