A Breakfast Visit to Disney’s Art of Animation Resort

On a recent visit to The Happiest Place on Earth, my dear friend Kristin and I decided to visit the newly opened Art of Animation Resort to check things out as well as try their some of their unique breakfast offerings. Kristin and I, along with my husband, will be staying at DAAR in January over Marathon Weekend, so we definitely wanted to explore a bit and see what it would have in store for us as guests! 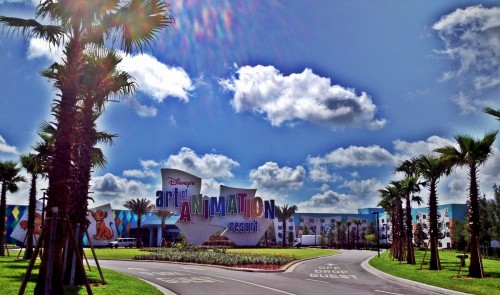 Upon pulling into the parking area, you are already able to get a sense that this resort is not quite as kitschy as any of the other value resorts. Most of the decoration/color is left to two dimensions instead of three, giving the building a very sleek, clean look while still being bright and colorful. The basic layout of the main building is the same as POP! Century: the main areas are located in the same places; the front desk, gift store, food court, arcade, etc. It might feel empty in comparison to many props and shadow boxes that adorn POP! Century, except there is so much color around you that it never feels undecorated; it just feels clean. Shapely lines and curves are everywhere, making you feel as though you’ve stepped right on to the animator’s desk. The front desk sparkles with color while the backlit storyboard sketches that decorate the Ink & Paint Shop entrance positively glow. 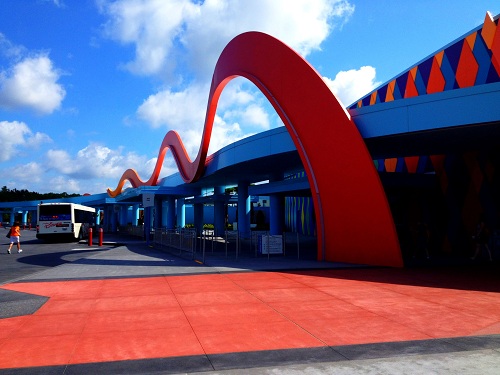 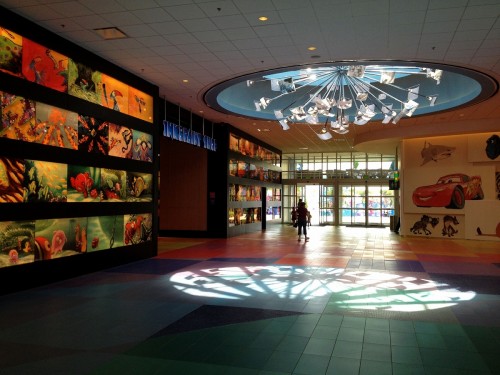 The Ink & Paint Shop (Gift Store) is decorated colorful bottles of paint and other tools of the animator’s trade decorate the border area near to the ceiling, as if you were walking into a large shelving area for paints. Apparel is on the right, as you enter from the Main Lobby, while sundries and souvenirs are on the left. It was awesome to see some resort specific merchandise for Art of Animation, having everything from apparel to drinkwear and keychains.

The Landscape of Flavors food court area is again, laid out much the same way as POP! Century. I will say though that it seemed a little smaller than it’s counterpart across Hourglass Lake, likely due to there being no exposed/painted piping in AoA like there is at POP!. Everything has walls and ceilings in order to display the unique light fixtures/artwork for each of the four seating sections, each one dedicated to one of the movies featured at the resort: Little Mermaid, Finding Nemo, Cars, and The Lion King. The food counters are organized similarly, however the cabinets with cold drinks and baked goods are now on the far left instead of in between the sets of food counters. Instead of just having pastries and coffee at the far left, there are fresh smoothies and gelato also available from that counter. The rest of the food counters had a various assortment of other breakfast platters and goodies. After looking through all the choices, I decided to first try the World of Flavors breakfast platter: fresh scrambled eggs, bacon, potatoes, along with the fresh naan bread and Portuguese sausages. While my breakfast was being plated, we were blown away that you actually saw them beating the eggs in the back- no stale, warmed over eggs here! Granted, what I did have came from a behind a window counter, but watching them actually do the cooking for what goes in the displays was a nice touch. 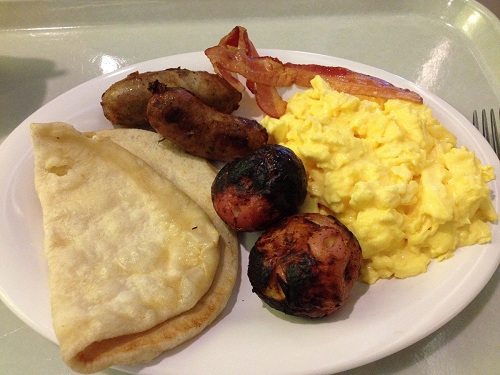 Of all the parts of my breakfast platter, the best parts were the naan bread and the sausages. The bread was chewy and soft, full of flavor, and the sausages were probably some of the best I’ve ever had, thick and juicy with different spices. There were real sausages compared to the small links you see around most of the rest of the resorts for breakfast! After ordering my platter, I decided to indulge a bit as well and get a mango smoothie and some of the fresh gelato. The Cast Member (CM) was so friendly as I watched him fill the blender with all kinds of fresh ingredients, and then top off the rim with a piece of freshly cut mango. The gelato was absolutely scrumptious; I had chocolate and pistachio and found it very creamy and smooth, and it even had fresh pistachios folded in! I was also given two choices for sprinkles and loved both the mickey sprinkles and the chocolate covered crunchers. 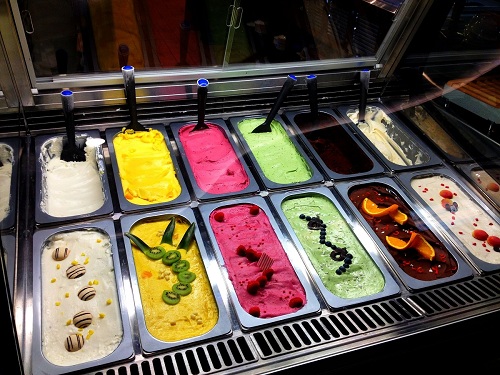 After breakfast and gelato, We walked around the rest of the resort to soak it all in and take some pictures. The theming, plants, outdoor 3D figures are done very tastefully and in such a way that it completely surrounds you with what you might expect to see if you walked through your television and into the movie. Nothing feels random; everything compliments the environment you’ve stepped into, and each section is unique on to itself. Nothing blends from one section to the next. (We loved how the sidewalk turned to “road” as you ventured into the Cars area!) 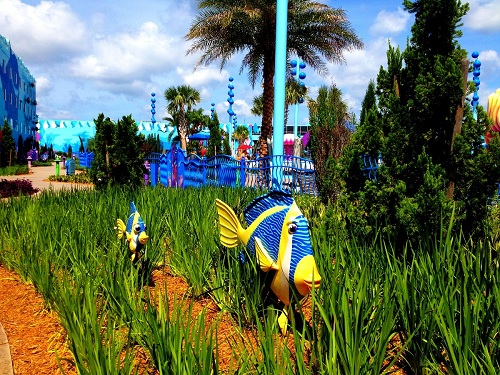 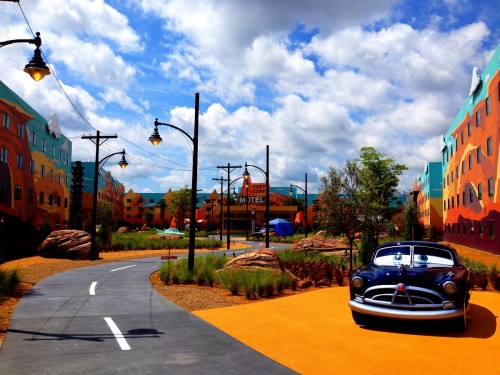 We didn’t get to look in any rooms, as we were just day guests, but will look forward to staying in the Little Mermaid section come January! Until then, we have these pictures and a lovely Saturday morning experience to tide us over. We really enjoyed visiting the resort and all it’s very friendly CMs. Can’t wait to come back as an overnight guest!