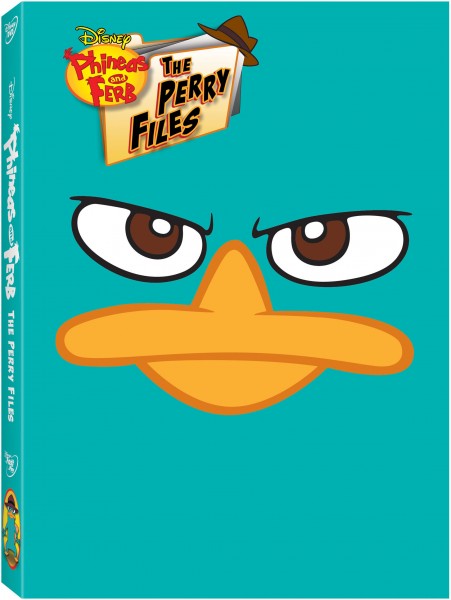 The Perry Files is a Phineas and Ferb compilation DVD that was released on June 5th. It features 7 full-length episodes with a heavy focus on everyone’s favorite crime fighting mammal. For anyone who is new to the series, here is a quick synopsis of the series: Two very creative step-brothers want to spend their summer wisely, so they do crazy and kooky things everyday to make the most of it, all while their annoyed sister tries to put a stop to it. All while this is happening, Perry the Platypus, the brother’s pet, doubles as a secret agent trying to put a stop to Dr. Doofenshmirtz. Both stories happen at the same time, and end up intertwining by the end of the episode. The show is great for everyone, since it has a large amount of “It will go over their head jokes” that the parents will enjoy, but enough for the kids as well (Look for the Muppet Show reference!).

I found the DVD quite enjoyable. I am a big fan of the series, but one who watches if I happen to catch it on TV. It is not “appointment TV.” A lot of these episodes I hadn’t seen before, which was very nice. “Magic Carpet Ride” was by far my favorite, with Candace (the brother’s sister) taking advice from fortune cookies to bust her brothers, all while the brothers take their dad and their friends on an “Aerial Area Rug.” Overall though, the musical numbers are my favorite part of the show. They always have hilarious lyrics while still relating to the subject matter. Like this one called “Spa Day,” which gets major points in my book for rhyming something with aromatherapy.

Now, unfortunately, there was a few faults. The bonus features were VERY lacking, with only 2. One featuring the Perry the PlatyBUS touring the country and the other being a recruitment video for the OWCA (The Organization Without a Cool Acronym). Both only were around 2 minutes long. I realize that this doesn’t need extravagant bonus features, since this is just a compilation DVD for a Disney Channel show, but I still would have liked to have seen an interactive game of some sort (along the same lines as the Timon “Who Wants to be a Millionaire” game on the old “The Lion King 1 1/2” DVD). Also, maybe I wasn’t paying well enough attention, but “The Remains of a Platypus” episode was very confusing. I’m not even sure how kids can understand. Other than that, it was a VERY solid DVD.

The copy I received was a combo pack, which included a DVD, a digital copy, and a “fun pack” featuring some neat stuff for the kids, like a magnetic feelings tracker, a puzzle, some stickers, and other neat things. If you are a Phineas and Ferb fan, I would definitely recommend this. I would even suggest this to someone who is new to the series, it is a great introduction. The combo pack is $19.99, save 25% if you order it from Amazon, or next time you are at Target or Wal-Mart, go ahead and pick it up, you will happy you did! Until next time, Have a Magical Day!