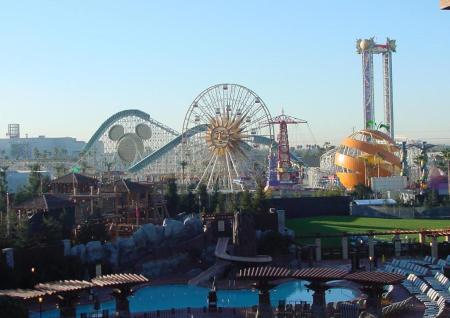 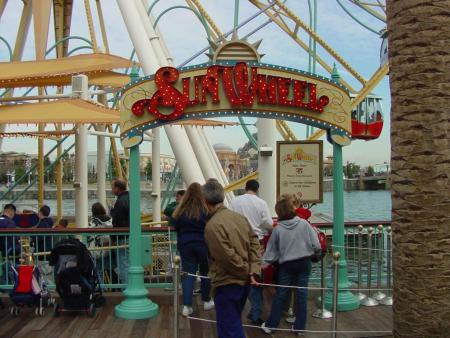 Right next door to the wheel was the Maliboomer (Get it? Maibu+Boomer=Maliboomer). This “opposite of Tower of Terror” ride shot guests 180 feet into the air, making them feel as if they were the puck on the classic strongman game as they hit the 1000 point bell. This ride system was manufactured by a popular ride creator, and the exact same ride could be ridden at many theme parks across the country. What’s different about this version? Scream shields. Plexiglass shields were put in front of every seat in order to limit the amount of noise that could possibly bother surrounding neighborhoods in the Anaheim area. After much flack for it being not Disney like, the ride was closed and disassembled in 2010. The area now features a small park. (If you listen closely to the video below, you can hear the bell being rung as you hit the top of your ascent!)

Close by was the infamous Orange Stinger. Why was it infamous you say? Well, to start, it was a classic swing ride. Most fans hated the idea of the Paradise Pier for this reason alone, why put in “classic boardwalk rides” when I can go to the county fair or an actual boardwalk and ride them for a much cheaper price. The second reason, the theming. You sat inside a giant orange peel, as if you were bees? Huh? Originally, every seat was covered with a very neat “bee butt” to make you actually feel as if you were a bee. A couple of days after the ride opened to the public, the covers were removed after the wear and tear the seats were receiving was substantial. The ride was eventually closed in July of 2009 and was replaced by Silly Symphony Swings in June of 2010.

Lastly, another one of DCA’s follies…Mulholland Madness. This classic wild mouse ride was themed to the crazy winding roads of California (?). Almost an exact copy of multiple wild mouse coasters across the country, this ride received A LOT of flack when it was open. The theming and “it’s everywhere else” cards were played quite often. Adorned with various road signs and billboards, the ride lacked the Disney charm that most people expect from a Disney attraction. The ride closed in October of 2010 and returned in June of 2011 under the new name and (much better) theme Goofy’s Sky School.

We have done it! We have covered (almost) all of DCA’s past! Thanks for staying with the series and catching up on your DCA knowledge. June 15th is going to be an awesome day as we get to look back on how this park has grown. And until next time, Have a Magical DCA-filled Day!