Golden Vine Winery is the next stop on our “Did this really fit?” DCA Tour. This pavilion was presented by Robert Mondavi, wine maker extraordinaire. This ginormous, multi-tiered area was host to multiple restaurants and wine tasting bars, along with “Seasons of the Vine”. This 7 minute movie (narrated by Jeremy Irons) showed a winery through the seasons and explain how wine was made at the Mondavi winery. Staffed with “Wine Ambassadors” trained by the Mondavi company, any wine questions could be answered after the film, or throughout the pavilion. The film stopped showing in March of 2008 and transformed into the Blue Sky Cellar, a preview center for the DCA revamp project.

Wine Country Market was the quick service location in the building, often regarded as the best quick service restaurants in recent memory. The location featured gourmet “grab and go” options, like fancy cheeses and freshly made sandwiches. The store also had Golden Vine Winery merchandise and Robert Mondavi wines by-the-bottle for sale. Some thought the prices were unreasonably high, even for theme park food, but others argued saying that you paid for what you received…gourmet food. When the Mondavi Corporation announced the deal with Disney had lost them over $12 million dollars and that they were cutting their 10 year agreement short, Disney quickly closed the place for good. It eventually turned into the current Wine Country Tratoria. 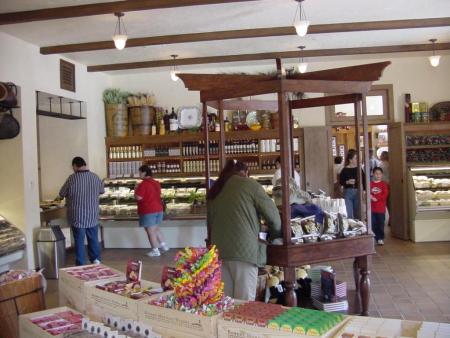 Finally, let us reminisce over the Mission Tortilla Factory. This attraction was a walking tour through a real working tortilla factory…in the middle of a theme park! I find that awesome! After a short pre-show video featuring 3 grade school kids explaining the history of the tortilla, you entered into a small room with interesting holographic tortilla makers in tiny windows lining the wall. At your own pace, you can enter the actual tortilla production area. Multiple signs and staff were there to answer any tortilla related questions and hand out free samples. The last room featured a demonstration kitchen that introduced tortilla recipes to guests. At the beginning of its life (it was an opening day attraction), it was often mocked as being called an “attraction”, along with the Boudin Bakery Tour right across the pathway (and for the record, the Boudin Bakery Tour was my favorite part of DCA when I visited. I did it 5 times…), as it was just a walking tour. It eventually developed a cult status and had a pretty steady flow of guests up until May of 2011, when the Mission Tortilla company decided not to renew their contract with Disney. The Ghirardelli Chocolate Store and Soda Fountain opened this month in its place.

Well there you go, three distinct parts of opening day DCA that have since gone the way of the Dodo bird. Do you miss any of these experiences? Do you wish they could have been integrated into the new DCA design? Do you miss those tortillas as much as I do? Let me know in the comments below. Next time, we will be having Christmas in June, as we look back at DCA’s past holiday experiences! Until next time, Have a Magical Day!