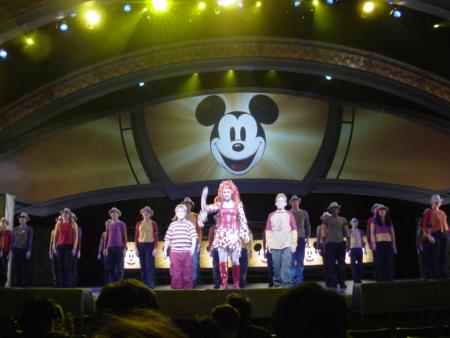 We are t-minus 3 weeks and counting until the re-unveiling of Disney California Adventure. I don’t know about you, but with the constant pictures and videos from inside Carsland and Buena Vista Street (Not to mention the newly opened Carthay Circle Theater and fountain!) make me even more anxious for the June 15th celebration. Today though, we are continuing to take a trip back in time as we look back at the Hyperion Theater. Now, I do realize it is still standing, but I am talking about the 2 former shows that have graced its stage. So take a seat, buy a souvenir, grab some popcorn, and relive the Hyperion’s past.

With the front being modeled after the Los Angeles Theater and the side entrance being modeled after the Beverly Wilshire Hotel, the 2000-seat theater opened with the park on Feb 8th, 2001. It was meant to be a place for not only daily park shows, but high profile events like awards shows and movie premieres.  The theater opened with the daily show “Steps in Time”. The gist was a group of 4 adult singers and a bunch of dancers who worked their way through different arrangements of classic Disney songs (Think Disneymania). Here is the thing though, this version premiered…before the park officially opened. This version was shown during various preview and media days. Once Michael Eisner saw the show, as a good Disney exec does, he had his own opinion. He decided the show needed a story line, in true Disney fashion. The result (which actually premiered with the park) had a more elaborate set and a distinct story (which involved two brothers, one of which who didn’t have a dream, with Vera, a “modern” fairy godmother, teaching him the power and value of dreams).Unfortunately, concerns were still present with the show. Many criticized Anne Hamburger, the then Head of Theme Park Entertainment, for wasting money to make this show “better”, when it actually turned out worse. The show came to an end in October of 2001.

“The Power of BLAST!” replaced “Steps in Time” after a Tony Award winning Broadway run, and a successful limited engagement at EPCOT. This version was 30 minutes and had 5 musical numbers. The idea of the show was taking drum line and band music and melting it together with dance numbers, humor, and effects. The show opened in November of 2001 and became wildly successful. So why the nine month run? First of all, Disney does not like when something from an outside company becomes more popular than something they created (Case and point, Glow Fest in 2010). Secondly, it was EXPENSIVE! The amount of cast and crew, as well as the special effects and set design costs started to add up to something that was just too much. Eventually the show closed to make way for “Aladdin: A Musical Spectacular”, which opened in Jan. of 2003.

Do you miss “Steps in Time” or “The Power of BLAST!”? Would you like to see something else in the Hyperion Theater? Can you believe that Eden Espinosa was in “Steps in Time”,  but now sings the title track to the “Magical” fireworks show!? Let me know in the comments below. Today was a short and sweet article, but next week…we might have a long one on our hands. I will be covering a hodge-podge of topics: Bountiful Valley Farm, the Golden Vine Winery, and the Mission Tortilla Factory. I know, not the most EXCITING topics ever, but I need to make sure you are thoroughly informed before June 15th! Anyway, until next time…Have a Magical Day!