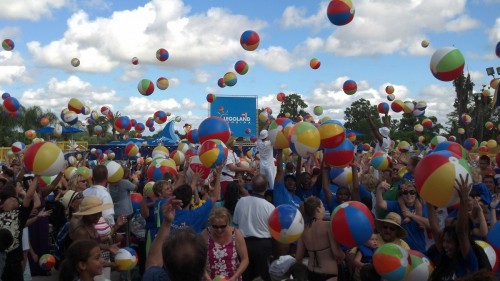 Growing up I always wanted to help set a Guinness World Record. I’ve now done it twice at the same location, but at two different theme parks and for two different records. How does that work? First was at Cypress Gardens for the world’s largest Easter Egg Hunt. This morning was at LEGOLAND Florida’s new water park where we set the record for most beach balls in the air at the same time. LEGOLAND Florida, of course, took over the old Cypress Gardens adventure park and water park.

Here’s a video of the event. I like the section where over 1000 beach balls are launched into the air simultaneously.

The water park features the same attractions as the Cypress Gardens version, plus a new toddler play area, but refurbished and with many LEGO touches added. I enjoyed the Lazy River, where you can build a LEGO brick raft and the wave pool. The LEGOLAND Water Park opens to the public on May 26th and is sure to be a popular destination for locals and visitors alike.