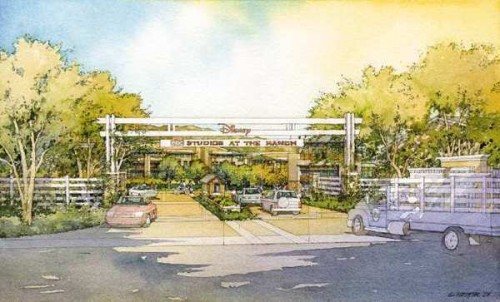 Ever since filming a few episodes of Spin and Marty back in the day, the Walt Disney Company has worked on a piece of property, once a cattle ranch, and now known as the Golden Oak Ranch out near the Santa Clarita Valley. If you’ve watched any Disney movies or Disney Channel specials, you’ve no doubt seen large parts of it. The 890 acre plot is close enough to Hollywood that you can easily get there to film but not have to pay expensive transportation costs.

Part of the wonder of Golden Oak Ranch was that it was kept in a mostly natural state, but now Disney is looking at expanding some more permanent structures and building a high tech studio for ABC and the movie divisions.

Already, Disney has been promoting its plans to local residents, sending out brochures touting the economic benefits, saying the complex would create 3,152 construction jobs, in addition to 2,854 positions once completed, and contribute $533 million annually to the county’s economy.

Disney said the development would affect only 6% of the ranch, on two mostly barren parcels of land, preserving most of the property as natural backdrop. Plans also call for restoring a portion of Placerita Creek with natural vegetation, planting 1,600 oak trees to replace 158 that will be removed, and adding a nature trail to connect to existing trails in the Los Angeles National Forest.

More at the LA Times.