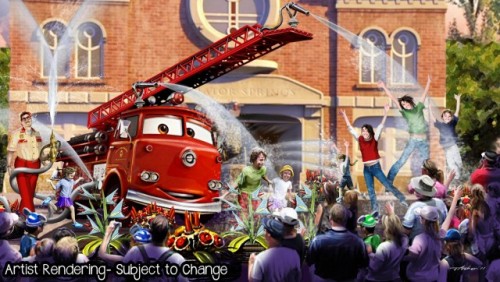 In Cars Land, DJ, the ultimate party car – a big road-trippin’ mobile boom box with giant speakers, built-in disc changer and his very own party crew – takes to the street for “DJ’s Dance ‘n Drive,” a spontaneous, interactive dance party. Also at Cars Land is Red the Fire Truck who, with the help of his comic “Volunteer Fireman,” recruits guests of all ages to join “Red to the Rescue!” – helping water the flowers and clean up the town of Radiator Springs. (Prepare to get wet!) 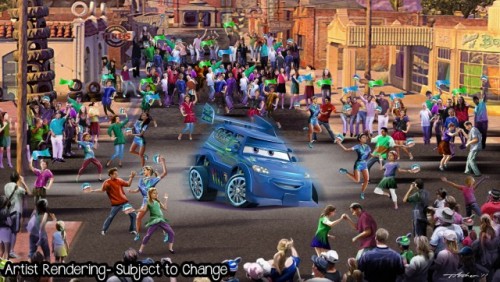 Of course, Lightning McQueen and Mater, leading citizens of Cars Land, also are enjoying time on the streets of Radiator Springs, greeting and posing for photographs with guests near the Cozy Cone Motel.

Buena Vista Street, inspired by the Los Angeles of the 1920s and ’30s when Walt Disney was launching his animation studios, is brought to life with a series of eccentric personalities, the Citizens of Buena Vista Street. Among the “citizens” strolling the street and immersing guests in the period atmosphere are a fun-loving photographer, a misguided messenger, a dotty dog lover and a comic cop.

Inspired by the spirit and style of Disney’s movie and stage musical “Newsies,” the “Red Car News Boys” roll into Buena Vista Street aboard one of the street’s distinctive Red Car Trolleys, performing a variety of authentic period tunes such as “California, Here I Come.” Mickey Mouse, the fun-loving, mischievous young cartoon star of the period, joins the boys for a high-energy street show. 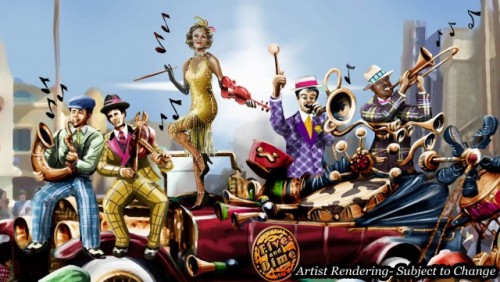 Also arriving on Buena Vista Street, by means of a makeshift jalopy en route to Hollywood, are “Five & Dime,” an innovative sextet of maverick musicologists longing for their big break. “Dime,” the female vocalist of the group, has charisma and a voice like a young Ella Fitzgerald, and the group enlists some “new musicians” from among the spectators to perform side-splitting versions of ’20s and ’30s song standards.

All the colorful characters interacting with guests along Buena Vista Street reflect the spirit of optimism and opportunity Walt Disney discovered when he first arrived in California. Dressed in period attire of the 1920s and ’30s, each performer has a unique identity that brings this boulevard of dreams to life, creating impromptu laughter and memories.

Over in Condor Flats, near Soarin’ Over California, Minnie Mouse plays hostess for a tune-filled “travelogue” of song, dance and interactive moments. “Minnie’s Fly Girls Charter Airline” features Minnie and her four-member crew singing and swinging to songs from the ’40s, ’50s and ’60s. The show includes opportunities for guests to meet Minnie and join the dancing.

After dark, a new nighttime family celebration takes over Hollywood Land. “Mad T Party” is a fantastic soiree filled with surprises and new takes on some familiar characters from the world of Tim Burton’s “Alice in Wonderland.” It’s a party like no other as guests fall into the rabbit hole and land in a wild and whimsical world where nothing is what it seems. A live band, unique entertainment, fun-filled games and plenty of dancing await guests seeking an escape into a bright and vivid alternate reality.

The all-new entertainment joins an existing lineup highlighted by “World of Color,” the colorful water, laser and animation spectacular performing on Paradise Bay, and the long-running hit “Disney’s Aladdin – A Musical Spectacular.” “Disney’s Aladdin,” ever popular with guests, adds a fifth daily performance through the summer season.

An extended Disney California Adventure parade route, the longest in any Disney theme park, serves as the stage for the returning “Pixar Play Parade,” now traveling all the way through Hollywood Land and onward to Paradise Pier. “Pixar Play Parade” invites guests of all ages to share the thrills of a whirling, spinning, fun-for-all animated playground featuring acrobatics, bungees, playful choreography and interactive surprises that bring to life the exciting and colorful worlds of Disney•Pixar pals from “Toy Story,” “a bug’s life,” ” Monsters, Inc.,” “Finding Nemo,” “The Incredibles” and “Cars.”