TRON: Uprising gets a Trailer and Release Date 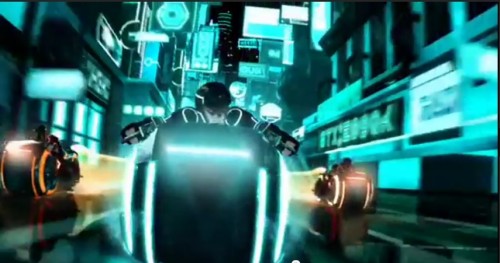 TRON: Uprising is the Disney XD animated series that has fan boys setting their DVRs to stun. My hope is that it will also introduce a new generation to the wonders of TRON.

Set between the two Disney movies, TRON: Uprising has a list of notable actors doing its voice work (Elijah Wood, Mandy Moore, Emmanuelle Chriqui, Lance Henriksen, Paul Reubens and, from the films, Bruce Boxleitner). The show officially debuts Thursday, June 7, on Disney XD, but Disney will also air a special half-hour Tron “prelude” next month, titled Tron: Uprising, Beck’s Beginning, that will air on the flagship Disney Channel on May 18. Here’s the official description of the ‘prelude’:

“TRON: Uprising, Beck’s Beginning,” introduces a Beck, a young mechanic living in Argon City, a growing metropolis in a far off corner of the grid that has just been occupied by General Tesler, a henchman of the notorious Clu. After his best friend Bodhi is ruthlessly derezzed by Clu’s army, Beck seeks justice for his lost friend and launches a crusade against the regime. His rebellion captures the attention of Tron, the greatest warrior The Grid has ever known, who sees the potential in Beck and trains him to be his successor. Labeled with the moniker of The Renegade, Beck sparks a revolution to fight for the freedom of The Grid.”

Are you planning to watch?