In just a week, we’ve managed to fast forward almost 3 months. Daniel’s trial is just about to begin. Jack is still out searching for Amanda. And Declan is scheduled to be a key witness in Daniel’s trial. Jack decides it’s time to come home.

Daniel’s team is hard at work, and they decide Emily is the best choice for an opening witness. The forensic evidence is not on his side, and they need to paint Daniel as a sympathetic character so who better to do that than Emily? (Victoria, of course, whines about this.) Their main goal is to present reasonable doubt in the jury because the DA’s initial offer no longer exists.

We learned in last week’s episode that Victoria will do just about anything to protect her son (even get him beat up in jail), so when they focus on one particular juror who has a son, it’s no surprise she is going to get Lee (the one who beat up Daniel & Jack) to join in the party and make sure the jury knows what is what. 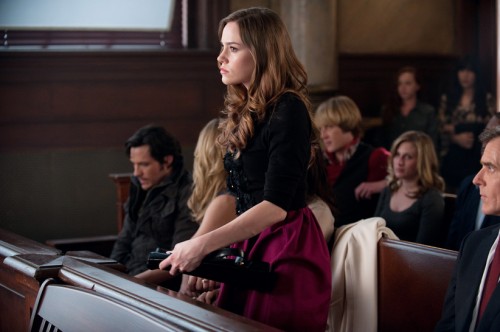 Meanwhile, Jack is home and for once, Declan is making some kind of sense. He sees Jack still has the hoodie from last night and feels that Jack is too busy trying to protect Amanda and not their family. Point 1 for Declan. The poor kid has no mom or dad, and his brother could easily be convicted of killing Tyler. But Jack cannot get Amanda out of his head. (Seriously, weren’t they super young when she left the Hamptons because of her dad’s arrest? That’s some kind of loyalty.) At least we get an Emily and Jack scene out of the whole episode. He unloads a bunch of his problems on her, and immediately feels bad because her future husband is on trial for murder (ha!).

Of course, Daniel is spying from Victoria’s perch and drinking a lot. He sees Jack go into Emily’s house and is only thinking the worst. Because last summer he almost killed his girlfriend in a car wreck and this summer he shot his best friend IN COLD BLOOD, as he tells his mom. Victoria, again, tries to take matters into her own hands and calls the lawyer. She wants Jack subpoenaed as a “hostile witness”.

Victoria’s not done though. (Is she ever?) First, she has another romantic interlude with Dominic in his studio. I was actually cringing at their dialogue. It was so Harlequin heavy, leaning toward trashy romance novel. (Examples: Drawn to his fire, scared to turn to ash, entered a marriage of convenience, walked around in emptiness.) She does (and this might become important) tell Dominic about falling in love with David Clarke and how that whole went down.

As always, Victoria impresses me with her ability to have this full-fledged romance and concoct crazy plans to protect Daniel. Now she corrupts Charlotte, or guilts her into going to Declan’s and getting him to agree to tell the original story (they both saw a guy in a hoodie) any way that she can. So Charlotte takes a cue from her mom, slips into a sexy dress, and promises Declan that they can be together again if he does the right thing. (We learn here that Declan is still going to her school but she has not spoken to him in 58 days.)

Nolan interrupts them. Declan expresses his fears of losing just about everything. Poor kid.

On the stand the next day, Declan sticks to his story that he did not see anyone on the beach and that Charlotte was high on oxycontin and no one should believe her. Did anyone else see Declan’s resemblance to James Van Der Beek here? He tries to save face by yelling that Charlotte is a good person and only wants to protect her brother.

Too late. She’s pissed and already moving on to her old jerky boyfriend, who provides drugs and sex. So Charlotte is spiraling (yet also reading a book about David Clarke).

Charlotte isn’t the only pissed off Grayson. Daniel calls Emily, drunk and yelling: “How do you plan to convince 12 strangers you love me when I’m not even sure myself?”

Ouch. Doesn’t help that he sees her leave the house and not pick up his phone calls.

Where is she going?

Well, Nolan has spotted the infamous hoodie and plants the evidence in Lee’s car. Lee, who has just threatened the life of a juror’s son and, ya know, beat up two of Emily’s boyfriends. When Emily gets home, Daniel is waiting for her which means he’s about to get arrested because he can’t travel that far on house arrest. He demands to know what is going on with her, and almost hits her. She seems surprised and the police swarm in and arrest him.

Lee calls Victoria and threatens her. She tries to cover up the call but Conrad is behind her and hears everything. She finally admits to him that she had Lee doing all the dirty work.

Best line of the night: “You have really lost it, you know that?” FINALLY SOMEONE NOTICES.

Conrad proceeds to tell her that he paid a little visit to see Dominic and after some art-brokering art talk (basically he forged paintings & Victoria sold them), gets him to disappear. Victoria is quite upset with that news. My big question is, will Dominic be back now that he knows Victoria’s real story? You never can tell on Revenge. (As if things can’t get dramatic enough, Vicky goes to visit Dominic’s place and he has left one painting in his absence – one of her.)

Back in jail, Daniel is writing a letter to Emily. He admits to killing Tyler because he didn’t like what he was saying about Emily. “He said you would betray me.” But Daniel feels like he is getting what he deserves now and is going to do them all a favor and “end this now”.

Next thing we know, someone is found dead in their cell.

Back at Emily’s, she makes a startling discovery. After all her research, she never once thought her father did not die in a prison fight. But after tapping Conrad’s phone and hearing Conrad order someone to “keep him quiet” and comparing it to the “David Clarke situation”, she realizes the truth.

The Graysons killed her dad.

And now revenge has taken on a whole new meaning.

Whoa. This episode was pretty fast-paced and just filled with Victoria ridiculousness. But I’m most curious in what Emily’s next move will be. And how Daniel will live with knowing he’s the one who killed Tyler (kind of) and getting off with zero consequence?

See you next week at 10pm on Wednesday for more!