Revenge is back on ABC, Don’t Doubt it 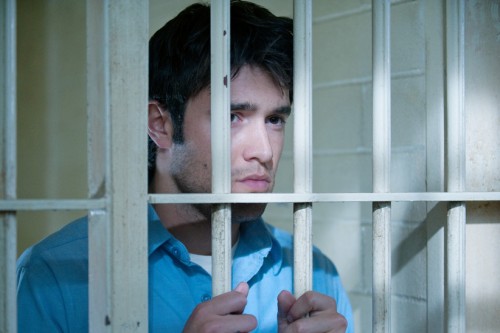 Hello Revenge watchers! I’ve missed you and all the drama from our favorite guilty pleasure, haven’t you? A month without it might have felt like a long time, but the show didn’t waste any time getting dramatic. Nice to know some things stay the same, right?

Let’s backtrack, shall we? Where are these characters? Daniel is in jail. Emily is sitting in her house, promising herself that she will stop from getting so emotionally invested this time and FOCUS. Nolan is forcing her to eat something, while corralling Jack. Declan is trying to protect his brother and still remain Charlotte’s boyfriend. Charlotte is popping pills like M&Ms. Jack is freaking out over Amanda and that bank slip. Victoria still dresses to the nines even though her beloved son is in jail. She and Conrad are trying to work on a strategy for their court date (early December).

This was one episode where viewers really see what Victoria can do with her power, influence, and cash. And what she can’t. Pretty immediately she’s trying to pinpoint the “guy in the hoodie” as a girl with her hair tied up in a hat. A girl like Amanda Clarke. (Charlotte won’t sink to her level.) In fact, she’s so obsessed with framing Amanda Clarke on Tyler’s murder that she refuses to brainstorm about other potential theories like her lawyer suggests. But soon after, a light bulb goes off for her. How about Jack Porter? Amanda’s boyfriend. It all makes perfect sense, and now Emily looks like she is going to puke. Will anyone really believe “Montauk’s favorite son” did this, she asks Victoria. Instead, Emily suggests they hire someone to sway public opinion before the trial proceedings even begin. (Conrad to Victoria: “She might be Grayson material afterall.”) 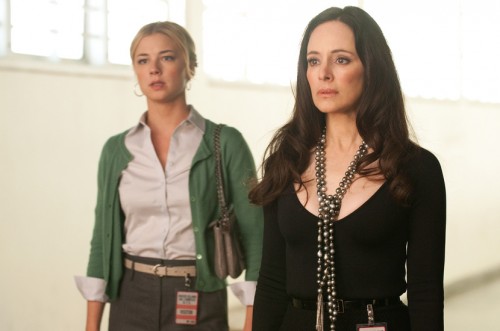 Nolan manages to track Mason down (on Emily’s orders), where he is drinking wine coolers and (oh-so-dramatically) never writing again due to the demise of his dear typewriter. (I have to say I loved this dialogue. It was deliciously theatrical and fitting… unlike most of the time.) Apparently, Mason has been living in a hole somewhere because he had NO idea that Daniel had been sent to jail for killing Tyler as his VERY own engagement party. Mason is practically salivating over this news. He agrees to help out. The final result: print isn’t enough. They want something more instantaneous. Like a blog called The Treadwell Report.

Remember I mentioned Victoria’s power? I swear, this woman thinks she is God. Upon hearing that the only way Daniel will be leaving jail is if he has some sort of medical emergency, it’s not surprising her first thought is to call the guy who beat Jack up and have him call his buddies at the jail to beat the snot out of Daniel. In a shower. So now the poor kid has not only been accused of murder at his ENGAGEMENT party but he has 2 cracked ribs and a semi-concussion.

Lesson 400: Do not take parenting lessons from Victoria.

As if things can’t get any better/worse, Victoria has climbed into some Harlequin romance with an old love of hers. (We learn later his name is Dominic.) He’s an ARTIST and she walks around in a sheet looking and feeling his PAINTINGS. (Okay ew… but she does!) This guy is pretty hunky in an “ex-cowboy” sort of way except he has smudges of paint all over his arms. (Nice touch.) Seems like they have a history? She was with him before running off to marry Conrad. And now he’s back so that should be a glorious distraction.

Lesson 576: Victoria is never distracted or concerned enough to not have hot and heavy sex with people.

Back in the Hamptons, Emily is keeping busy. She wants Nolan to get Jack far, far away. She plants Mason’s interview tapes in Victoria’s house. She spies on Victoria from a dark corner of a bar as she exchanges dough with the guy who beat up Jack and helped to beat up Daniel. (Does he have a name?) She greets Daniel when he gets home. All in a day’s work.

Mason is giddily into his new job. (Funny how the writing bug has crept up on him again.) He visits Jack at the bar, only to get dismissed and an “exclusive” with Declan. Not sure if Declan is dumber than I thought or smarter? I just know his heart is in the right place. He tells Mason that Charlotte was high at the party and they never saw a “guy in the hoodie”; they just made him up to save Daniel.

This is quite a revelation and Mason is intrigued. He questions Charlotte about that night and she denies it all. (Of course.) “You don’t have to be like the rest of your family.” (Mason had the best lines of the evening, if you ask me.) When the exclusive hits the web the next morning, Charlotte is pissed. She tells Declan he is just “another puppet” in the Grayson play and that Declan actually failed the entrance exam to their private school and her Gramps got him in. And then she pops more pills.

Big uh-oh. Even though Declan is saving his brother’s (cute) tush, he has now crushed every theory for the case because Charlotte is no longer a credible witness. Who cares if Victoria was off rolling around in bed with some hunky painter, Charlotte is the one ruining Daniel’s life and she gets a real (scary) slap in the face for it.

Can someone get this girl therapy? I know Gramps was all against it and made some threats but seriously. The Graysons aren’t going to have any kids left soon.

My favorite violin audio returns. It’s just the best, signaling that the show is about to just kick you in the gut a little more.

Jack is graciously off to Montreal to find Amanda. Victoria tries to keep her grip on Treadwell, who refuses to spread her lies anymore.

“Your empire is crumbling, my queen.”

Oh, it feels so good to hear that.

No threat she makes can convince Mason to print a retraction who calls it “a small price to pay to restore his soul.”

Gotta hand it to Victoria for being persistent. Daniel’s home but he can’t sleep and she tries to not-so-subtly hint that maybe Emily had something to do with Tyler’s death. Daniel tells his mom he would rather confess to the murder than to listen to this crap. Good for him. I don’t think Victoria gets if she keeps pushing how much she doesn’t like Emily in his face, he’s going to give up on her for good. The only reason he’s there now is because he has a tracking bracelet on. Doesn’t that make her feel all warm and gooey inside?

Meanwhile, Emily kicks some major ass back in New York City. She dons a cool wig, shares some shots with the guy who beat up Jack/Daniel, and then proceeds to beat the shit out of him. Not before she recorded him spilling all Victoria Grayson’s secrets.

What a small world. Victoria is back in NYC that night for some comfort from her artist lover boy (who turns out to have some kind of criminal past too. Surprise, surprise.)

Sex, lies, and the internet. All in 45 minutes or less.

What more could you want?

I’m not so sure, really. But come back next Wednesday at 10 for more. Revenge is generous with its drama.