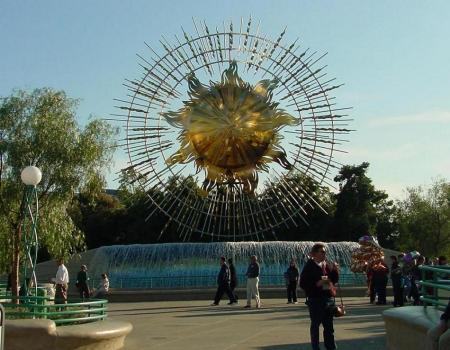 June 15th is the end of an era… the DCA era that is. Disney’s California Adventure will have its official grand opening on this day, ending the DCA that (very few) fans grew to know and love. I have decided to take on the role as “Unofficial DCA Historian” for The Disney Blog in these next couple weeks leading up to the big unveil. Hopefully, I can help you bring back some great (or terrible, always in the eye of the beholder) memories from the park’s humble beginnings.

I feel like it is only right to begin at the front of the park, so grab a hold of your figurative shoulder restraints and please keep all hands, arms, feet, and legs inside the DCA Time Machine at all times! 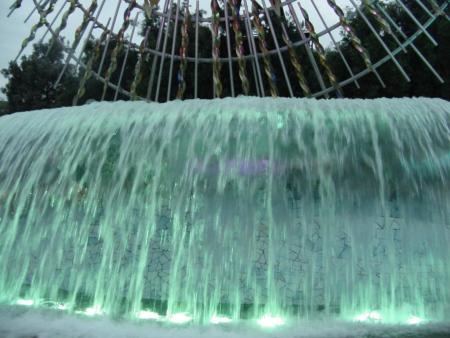 Sunshine Plaza was your welcome point to your own California Adventure up until September of 2010. The icon of the park stood at the end of a line of shops and dining experiences with punny names (Engine EAR toys, Burrrbank Ice Cream, etc.). The “Icon” was a 50-foot tall metal sun sculpture with a wave fountain at its bottom. Often called the “Hubcap” by regulars, this was intended to be the Cinderella Castle of the park. Oddly enough, it seems as if Disney didn’t even see it that way, as all merchandise used Grizzly Peak as the park logo.

The wave fountain was appreciated more and was complimented MUCH more than its larger and taller counterpart. Many “Reflectors” were placed around the front of the park, supposedly there to reflects the real sun’s rays and shine them on the hubcap to strengthen the sun effect. Most of the time, it ended up not working and just became a zit on the face of Sunshine Plaza. 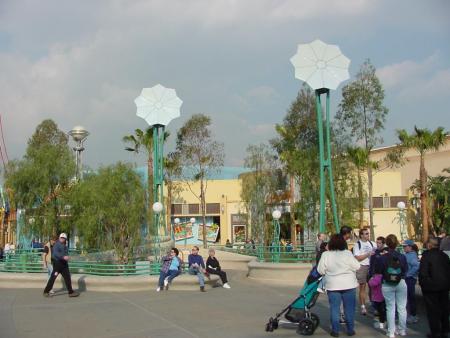 The Sun completed the “postcard” that was the park gates. This compromised of the California letters, the Golden Gate Bridge, and the tile murals on either side of the gates. Most guests did not realize this was the case and just passed by, probably since the effect was only achieved with certain camera angles. Throughout the years, the letters received various overlays, such as Christmas and the opening of the World of Color. But just like the Sun Icon, regulars HATED the thing, and were finally relieved when it came down. 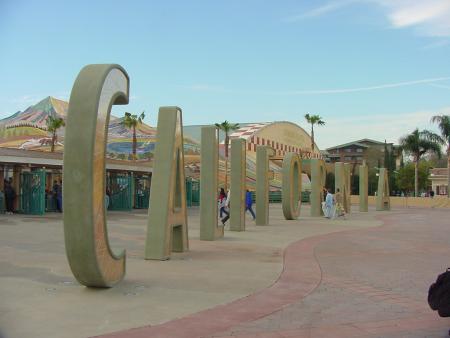 Have any memories from Sunshine Plaza? How about the park entrance? Wish you could have that hubcap on your car? Let me know in the comments below! Next week, I will return with an article on the piece de resistance of old DCA…Superstar Limo. I leave you with a video of the fountain in action. Until next week…have a magical day!