What should happen next at Downtown Disney Orlando?

Okay. Pleasure Island as it once was is long gone. These days the signs remain but the entertainment experience is completely different. For a while it looked like we’d get Hyperion Wharf (a name I like, but am not sure it was right for at Downtown Disney location), essentially a ‘light’ version of Downtown Disney Anaheim. Not a bad idea, but it has been canceled after just a few buildings were demolished. So now the question is, what’s next?

I think we can see some hint of what Disney has been planning for Downtown Disney Orlando in Splitsville – A bowling and dining entertainment mix that has been in the works for three years, just about the time officials were closing Adventurer’s Club and the rest of PI. They want a special mix of entertainment and dining that is suitable for families. In fact, they want a lot of it.

The Disney Gossip blog has the scoop on a project that, if implemented, would remake Downtown Disney into a much larger entertainment complex. 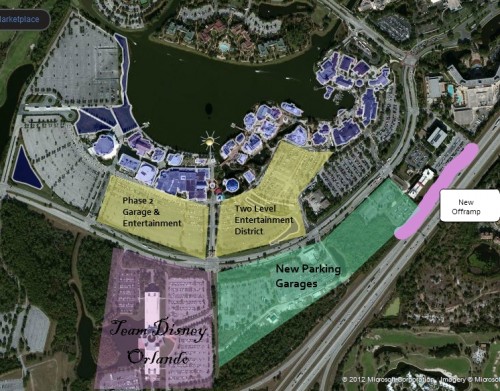 It sounds to me like CityWalk at Universal Orlando.

I’ve heard a few whispers about this project and am trying to figure out what Disney’s motivation for doing such a big expansion to Downtown Disney out on the edge of the resort. Shouldn’t they be trying to capture the dollars of their resort guests. I think another Boardwalk like restaurant, bar, and entertainment zone would work well over by Pop Century and Art of Animation. Lots of people in rooms over there and ESPN WWOS right near by with people looking for something to do after a day of sports.

Also, I’ve never understood why the three Magic Kingdom resorts have no night time offerings beyond restaurants. With more DVC rooms coming on line over there, there’s a nice plot of land near the TTC just calling out to be a entertainment zone. It has a built in view of the Magic Kingdom fireworks too. Get 3 or 4 of these spread around the resort and guests can get a different experience every night of their vacation.

What about you? Do you think Disney should try to out CityWalk Univeral Orlando or continue with the smaller entertainment complexes allowing guests to get a different experience each night?

2 thoughts on “What should happen next at Downtown Disney Orlando?”