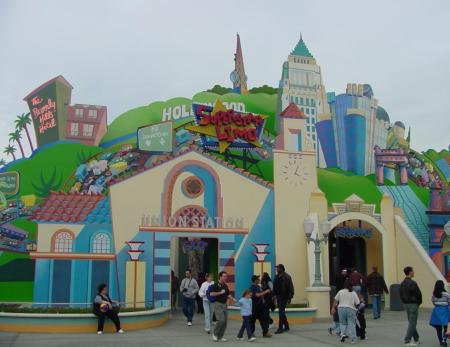 Despite creating the genre and 57 years of experience in the theme park industry, The Walt Disney Company has not hit every attraction out of the park. In fact, some were complete strikeouts. Here are a few of my nominees for the worst Disney Attraction Ever, add yours in the comments.

1) Superstar Limo – Now, don’t get me wrong. There was something very disturbing about the whole concept of this ride. But the Imagineers were trying to make a ride that fit in with the horrible theme of Disney’s California Adventure. The queue had horrible puppets charictures on TV Screens and the ride had a list of B, C, and D level celebrities, with oversized cartoonish heads, that Disney wanted you to think were top of the game.

Superstar Limo opened with the park on February 8, 2001 and was put out of its misery less than a year later on January 11, 2002. That must be some sort of record.

2) ExtraTERRORestrial Alien Encounter – I may be in the minority on this one. But any attraction that drips blood on a captive audience gets a big ‘No go’ in my book. Additionally, I’m just not sure that level of scare is appropriate for a Magic Kingdom style park.

3) California Adventure’s Midway attractions – From Jumpin’ Jellyfish to Mulholland Madness and MaliBOOMer, someone was off their medication the day they approved those attractions to appear in a Disney theme park. Actually, it was budget cuts that did the park in. Wanting to build a full day experience on a half-day park budget, a lot of ‘off the shelf’ rides were placed in the park with minimal themeing to justify their existance.

4) Tomorrowland Exhibits 1955 – Construction on Tomorrowland only began with 6 months to go before opening. A lot of temporary structures were used and much of the land frankly felt more like a business expo than a theme park. Attractions like Bathroom of Tomorrow, the Hall of Aluminum Fame, the Hall of Chemistry or Fashion and Fabrics Through the Ages were just not the stuff of legend.

Those are a few of my nominees. Add yours in the comments below and we’ll hold a vote later to find out which was the worst attraction of all.

38 thoughts on “Worst Disney Attraction Ever”