Animation Magic comes to Animator’s Palate aboard the Disney Fantasy

The Animation Magic show in Animators Palate aboard the Disney Fantasy is a brand new addition to the Disney Cruise Line fleet. Guests draw their own characters only to have them appear later animated up on screen interacting with other characters. This lets each family member participate in the magic in a whole new way. 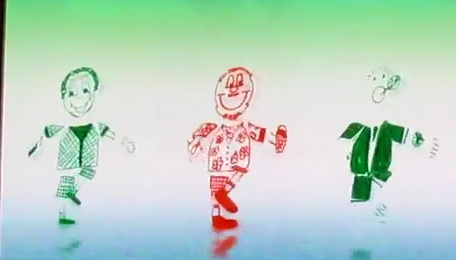 Here are the three characters created by the Frost family (mine is in the middle). The moment my character came to life, I felt not only whole new appreciation for animation, but a sense of “hey I can do that too”, even though I really can’t draw a straight line with a ruler.

Each section of Animator’s Palate has their own characters showing on the screens near them. Here is the show we saw from our table. If you’re planning on sailing on the Disney Fantasy soon, you might want to skip this so your joy isn’t dulled.

More on the technology behind “Animation Magic” below the jump: As guests are seated at their tables, they are invited to draw a character of their own using a simple template on their placemat. Then, just before dinner, house lights dim and a sprinkling of pixie dust illuminates the room.

During dinner, Mickey invites guests to sit back, relax and enjoy a taste of animation as a montage of memorable food-themed moments from Disney and Disney•Pixar films is displayed, set to the show tune “Be Our Guest.” After dinner, Mickey returns for the exciting finale. With a musical crescendo, he works his magic and conjures the guests’ drawings – now fully animated and brought to life – into the onscreen action.

A parade starts as Mickey leads the guests’ drawings in a march across the screens around the dining room. The animation of the drawings becomes increasingly more elaborate, and then the drawings step into scenes from beloved Disney movies and skip, skate and dance side-by-side with characters such as, Mickey Mouse, Jiminy Cricket, Cinderella and Snow White.

At the conclusion of the show, Mickey returns to say “so long” while credits roll on screen showing each guest’s name listed as a guest animator. To commemorate the experience, guests’ drawings are returned to them … with an added touch: a golden seal proclaiming them an Official Disney Animator.

The Themed Entertainment Association awarded Disney Cruise Line the “Ingenious Use of Technology” award for the “Animation Magic” show at Animator’s Palate on the Disney Fantasy.