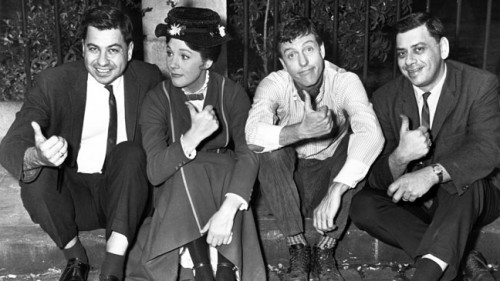 The Disney Insider has posted a very touching tribute to recently deceased Disney songsmith Robert Sherman, or as the author called him — Dad. We all know there’s something special about “it’s a small world”, but I have new appreciation after reading Jeffrey Sherman’s tribute to his father (my paragraphing):

Dad would be on the boat, but he never took in the ride. He’d watch the children’s faces. Dad studied their awe and wonder and loved that, by the end of the ride, these kids would know the words and be singing along. He’d always tear up. Dad told me he wished he could just stand at the end of that ride and shake everyone’s hand as they stepped off the boat. He wanted to thank each person for listening, for taking to heart his deceptively simple message of peace and brotherhood.

If you haven’t yet seen the documentary made by the Sherman brother’s own sons, The Boys, you definitely need to add it to your library.

It’s a main stay at the Disney’s theme parks now, but It’s a Small World first appeared at the 1964 World’s Fair. Here’s a clip of Walt Disney introducing the ride to the world:

For so many of us, this is the spirit of Disney that we grew up with. The Sherman brother’s were such a huge part of that. There’s no way I can ever be thankful enough.