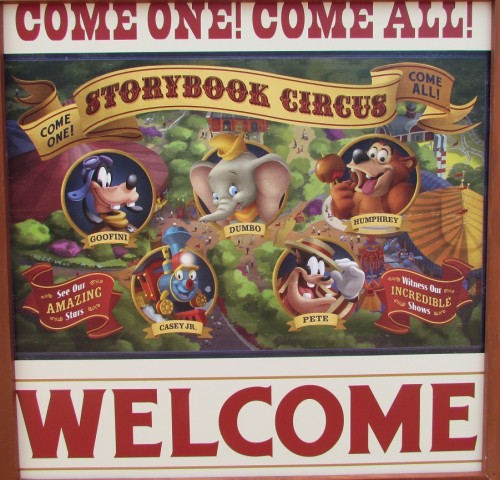 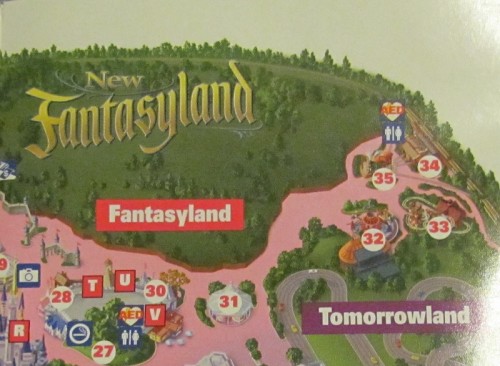 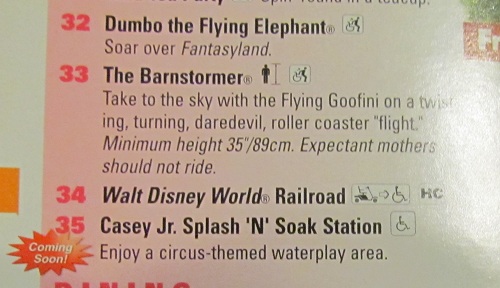 That caveat is that it’s coming soon. Also interesting is that #32 description is the same as when it was at it’s old location. You’re really flying over Carolwood Park, Fantasyland is over there somewhere by the castle. It’s as separated from Fantasyland in look, location, and style as the old Toontown Fair was. So you could argue that the description should change. Once you found your way to the back of the park, you were greeted by, yes, walls. Welcome to wall-land. Guests were also treated to upclose views of some on-going construction work. 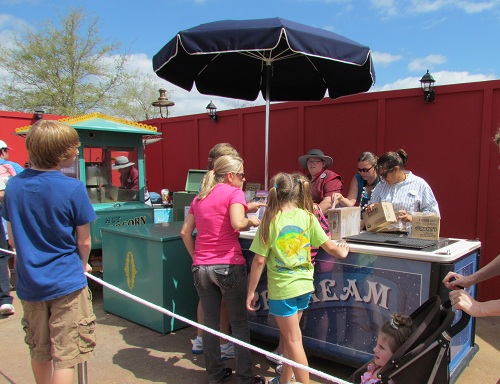 On your way in, you pass a refreshment stand with Ice Cream treats, popcorn, and sodas. Note this location. It was the only location in Storybook Circus serving food. That may change as they experiment with traffic flows and construction needs. 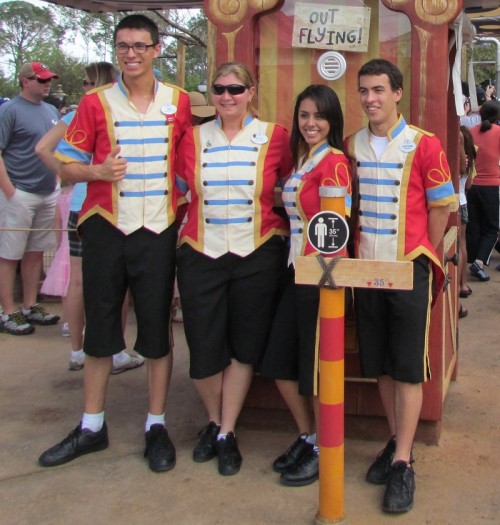 Modeling the new costumes for Storybook Circus. Not so sure about the white socks and undershirts here. They look like Circus ushers or band members. I kept expecting a parade to break out somewhere. But overall, I like the look. Just needs some guidelines to take care of the rough spots. 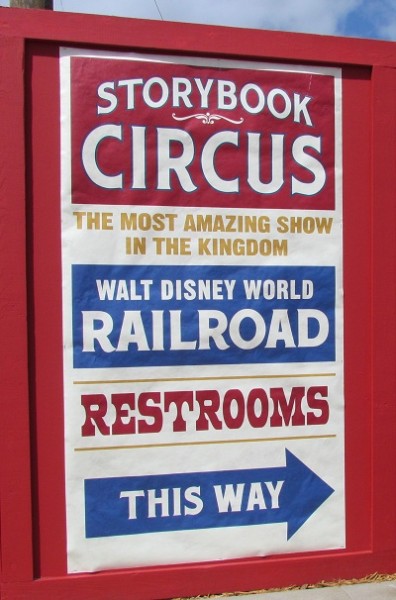 When cast members weren’t around to give directions, there were a few signs like this one up around the area. The first think you need to know about Dumbo is that there is water! Hooray! You’ll also notice there is a lot more detail on the Dumbo vehicles, not to mention the baroque look of the interior section of the spinner. Oh yeah, it also spins in the other direction than the old Dumbo. Getting our first up close view of the new restrooms. Very nice that they’ve been moved to this end of the land. 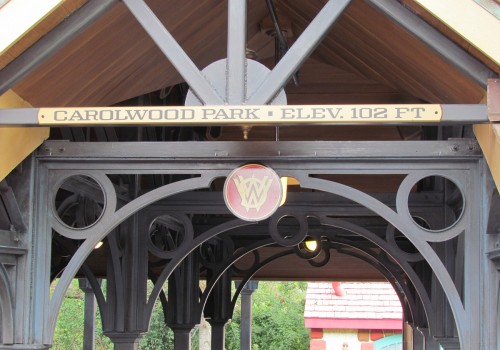 But even nicer is the huge tribute to Walt Disney’s personal backyard railroad the Carolwood Pacific. You’ll find lots of references to Carolwood Park around the train station and even throughout the rest of Storybook Circus. The backstory is that the circus is in town and set up in Carolwood Park. 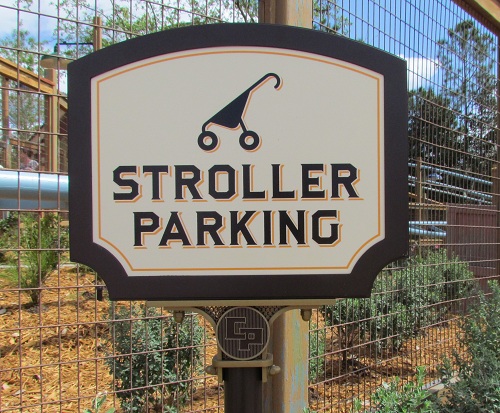 Even the stroller parking signs have a ‘Carolwood Park’ insignia. Nice detail. 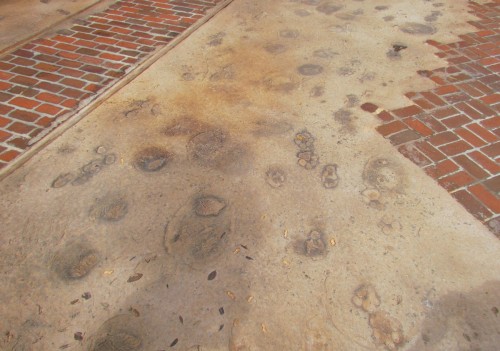 Speaking of detail you see animal footprints throughout the land. Notice the peanuts near the elephant tracks. Easy set of tracks appears to lead to a different attraction or store. 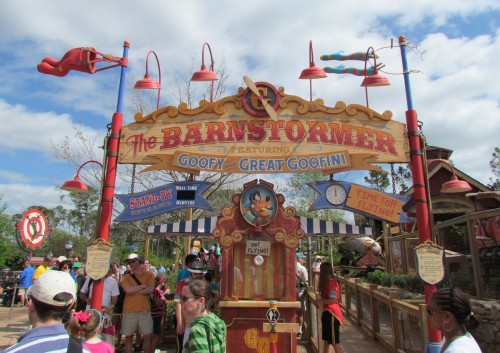 The entrance to The Barnstormer looks amazing. Not sure about that location for the height stick. Queues wavered between 30 and 60 minutes all afternoon. However, the line did move steadily and there was plenty to see in the queue. Observant eyes will remember the pants and socks from the old Goofy’s Barnstormer ride. Those are just some of the many tributes placed in the queue of this attraction. Kevin Yee will have a field day. Here are a few more excellent details. When unscrambled, the back of the marquee says “Wiseacre Farms” which was the old name for the location of Goofy’s Barnstormer. 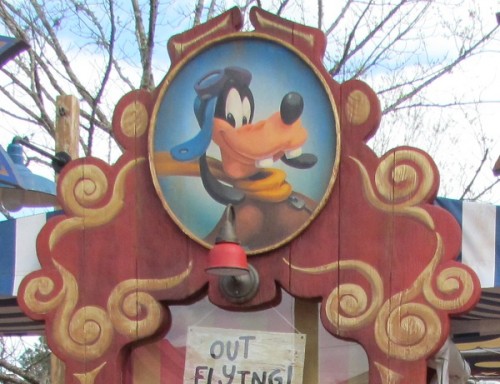 You might also notice a familiar three circle shape on the ticket booth. Yep it’s a Hidden Mickey. 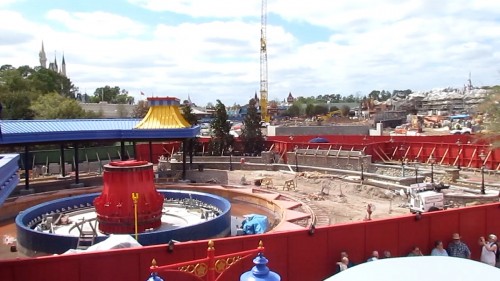 Before we go today, one quick look at the construction going on elsewhere in Fantasyland. A long way to go on the second Dumbo spinner, big walls are going up for the Mine Train coaster and rock work continues (still) around Beast’s Castle.

Thanks for reading this far. Plenty more to come from Storybook Circus over the next few days.

What do you think about the newest area of the Magic Kingdom? Let us know in the comments or on our Facebook page.