Editor: The tardiness of this post is my fault, not Estelle’s. 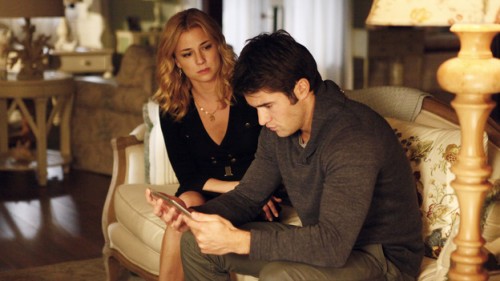 After last week’s fast-paced engagement/murder party and the fact that we have a whole month of March without any new episodes, I decided to switch things up a bit this week…

Ten things that happened on this week’s Revenge:

1. Declan is all of a sudden the smart one. I know, shocker. He’s dealing with the fact that Charlotte is starting to get super dependent on pills after finding out her real father is a criminal and her brother may be a murderer. Declan also catches on to the fact that Jack didn’t make it to Haiti because of “engine trouble” (unless that’s what Amanda is calling herself these days) and that he has a black hoodie a.k.a. “that creepy guy in the hoodie” (as Charlotte remembers him) before the two spotted Tyler’s body.

2. Daniel doesn’t remember anything about that night. Or so he says… he convinces Emily to take the dog for a walk (I think it was around midnight) so that he can dig through her floorboards and find out if Tyler was telling the truth. Was she playing him? His search comes up with nothing.

3. Courtney B. Vance (The Preacher’s Wife, Angela Bassett’s husband) is Daniel’s new lawyer. I I love Courtney B. Vance and he is one tough cookie. Mr. Brooks wants all the possible dirt he can get on Daniel. Emily tells him about Daniel’s horrendous car accident from the summer before, and Mr. Brooks is quick to corner Jack about Amanda’s whereabouts. Since Victoria loves to blame Amanda Clarke for just about everything she possibly can.

4. Emily and Daniel never got to open their engagement presents. Can you believe it? That psycho guy that held them at gunpoint was found murdered on the beach and they couldn’t find a spare moment? Crazy. Victoria is sure to bring over her gift to the couple as long as Emily promises not to open it. (Um, anyone else curious as to what it could be?) She also needs to know if Emily is going to stand by Daniel no matter what. Personally, I think Victoria was being genuine here or she has just mastered the subtle tear. (Favorite quip: perhaps your time in JD will become as asset in this situation. Awesome.)

5. Jack finds the receipt for Tyler’s ransom money in Amanda’s abandoned hoodie. He confides in Nolan, who tries to convince him to just forget Amanda. But Jack, and this is why we love him, is loyal and can’t do that. (I swear this whole thing is going to make him crazy.) 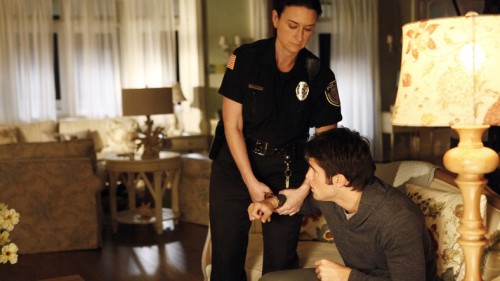 6. This is newsworthy. Daniel gets arrested. And Ashley becomes the family spokesperson. She’s at center stage, and Mr. Brooks has her number. “You play your cards right, and you can turn Daniel’s trial into a new career.” In every episode, Ashley’s character gets more mysterious and more interesting. What is her deal? Well, she is not squeaky clean. Nolan finds out she is the one feeding photos of the Graysons to the tabloids and confronts her about it. Who has the power now?

7. One of my favorite flashbacks of the whole series came in the beginning of the episode. Conrad is nursing a drink as the news of the planes going down plays in the background. He confesses to Victoria that he had been laundering money for the terrorist group that caused the crash. He actually seems to feel remorse. “You are going to have to raise Daniel alone under a cloud of disgrace.” Present day: Conrad and Victoria are feeling a little bit of déjà vu. “We seem destined to repeat our past.”

8. Emily discovers that Nolan has been working for Mr. Tekada. (All their secret glances in the last episode are making sense.) Apparently, Mr. T “cozied up” to Nolan to keep an eye out on Emily. That’s kind of sweet, I guess. Nolan apologizes for not being honest with her, and surprisingly, Emily is okay with it. She enlists him to deal with the Jack and Amanda situation. As in, Amanda is nowhere to be seen and Jack is going to be in trouble very soon.

9. Quote of the night: Mr. Brooks to Daniel: “You are rich. Who hates you?” This is after Daniel explains he shot Tyler once, after Tyler charged at him. The next thing he remembers is hearing his mom calling his name on the beach. Mr. Brooks reminds him of his head injury and wonders if someone else was involved. Another person on the beach because as you remember, Tyler was shot two more times.

10. And the answer is… Mr. Tekada was the one who knocked Daniel out and then made those final two shots to kill Tyler. He was also the gloved person who took Emily’s “revenge” picture. Amanda, on the other hand, has been “taken care of.” Forty-eight hours before, Emily had gotten the story from Mr. Tekada after they had a karate match in the living room of her house. Mr. Tekada reminds Emily that she cannot save both Jack and Daniel. She can only choose one. He leaves and Emily destroys her dad’s infinity box.

And there you have it. Tonight’s episode. I know in the beginning of the series I worried whether there would be enough material to keep this show going long-term. If you’ve been watching, you’ll realize they continue to pipe in the same dramatic, annoying music but I think there are definitely an infinite amount of ways the plotline can grow. Ashley. Conrad. Daniel. Gramps (who wasn’t in this episode). Will there be a wedding at all? Will Jack completely lose his mind? And what happens when the summer is really over and the Hamptons isn’t quite as fun? (Will we get some city episodes?)

See you in four weeks!