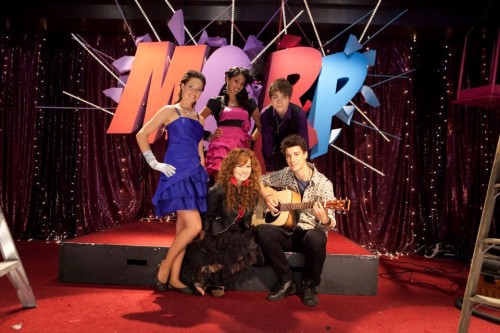 The Radio Rebel cast from left to right, Merritt Patterson as Stacy, Sarena Parmar as Audrey, Atticus Dean Mitchell as Gabe, Debby Ryan as Tara, and Adam DiMarco as Gavin.

Feb. 17th was the premiere of the new Disney Channel Original Movie (DCOM) “Radio Rebel” starring, star of “Jessie” and “Suite Life on Deck,” Debby Ryan. So here is the premise… girl in high school has extremely popular radio show that everyone in school listens to. She herself is very shy and to herself, yet her Radio Rebel personality is a free spirit and not at all nervous. After some flash mob-esque (Side note: doesn’t adding esque to the end of a word make it sound so much better!?) events go down on her campus because of what she says on her show, her principal becomes a Radio Rebel hunter and wants her expelled! (Say it ain’t so!) Since she doesn’t reveal herself, Prom is cancelled… which, of course, upsets the popular girl. I don’t want to say too much, but throw in a great best friend, an awesome and down to earth mom, as well as a cool DJ and some romance and you, my friend, have a wonderful Disney Channel Movie! 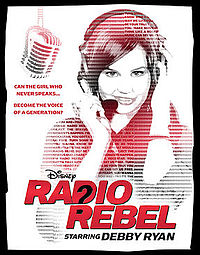 I found it very enjoyable. Debby was wonderful in it, adding just the right amount of comedy and heart for a DCOM. The only part that I really could have done without, were her two guy BFF’s. They seemed like they were put there for comic relief, but it wasn’t needed. It came off as like they were trying way too hard. Other than that though, it was great.

Not only is the movie very good, but the soundtrack is great as well. Now, it is not what you would expect from Disney Channel, but I almost enjoyed it better then the High School Musical-esque (see, SO much better with the esque!) music of Disney Channel yesteryear. It has a very nice pop-rock flare going for it, which I thoroughly enjoy. I suggest “Now I Can Be the Real Me” and “Brand New Day”. Check it out on iTunes for only 7.99…for 14 songs and a digital booklet! That’s what I call a bargain!

Overall, the movie is so lunarious (I have decided that I am now grading movies I review in Zenon: Girl of the 21st Century slang… gotta love it!). What did you think of the movie? How would you grade it (If you’re using a number scale, let 10 be Tiger Cruise and 1 be Quints)? Let me know, in the comments below! And until next time… Have A Magical Day!