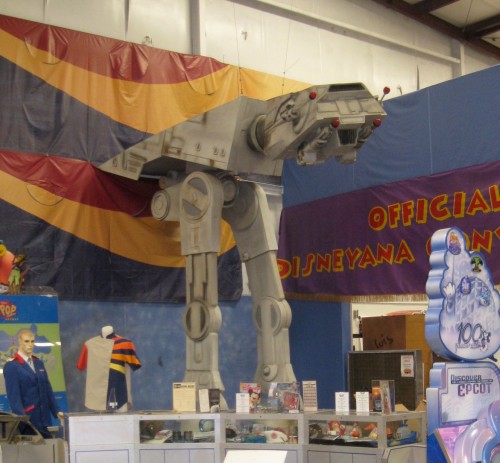 Disney theme park fans know one word when it comes to finding a piece of theme park history to take home with them. That word is MouseSurplus. With a new location in Kissimmee, MouseSurplus is full of costumes, props, signs, and attraction vehicles that will make the Disney fans heart skip a few beats.

Now they get to share that passion with the audience of A&E series “Shipping Wars” on a episode airing February 7, 2012 at 9pm ET. The show will feature a a move of a Star Wars AT-AT Walker and and X-Wing Fighter from MouseSurplus along 192 in Kissimmee all the way to Orem, Utah.

The props were originally part of the F.A.O. Schwartz store in Las Vegas that closed in 2004. I remember them fondly.

Orlando based Disney Collectible clearinghouse, MouseSurplus, to be featured on the hit A&E series “Shipping Wars” shipping one of a kind Star Wars props: a 25 foot tall Star Wars AT AT Walker and 8×6 foot X-Wing Fighter to a customer in Utah.

The segment was filmed on location at the MouseSurplus store front in Kissimmee, Florida. The episode, “May the Ship Be With You”, is the 10th episode of the series and premieres February 7, 2012 on A&E at 9:00 PM ET.

The AT AT Walker and X-Wing fighter are shipped from Kissimmee, Florida to Orem, Utah by one of the stars of the series, Roy Garber. Although Roy is a Star Wars fan and is excited about the job, it doesn’t come easy, as noted on the “Shipping Wars” website: “Roy lands the shipment of his dreams when he gets to haul some large one-of-a-kind props from his favorite sci-fi movie. But when he is cut-off by another trucker on the highway, he’s afraid it may have damaged these priceless movie artifacts.”

The Star Wars AT AT Walker and X-Wing Fighter replicas featured in the episode were custom made for the FAO Schwartz at Caesars Palace in Las Vegas, Nevada. The replica pieces were sold to MouseSurplus when the store closed in January, 2004. The AT AT Walker replica measures 25 feet tall, weighs over 2,000 pounds and took over a dozen people and close to 80 man hours to assemble at the MouseSurplus headquarters.