President Obama to speak at Walt Disney World on Thursday 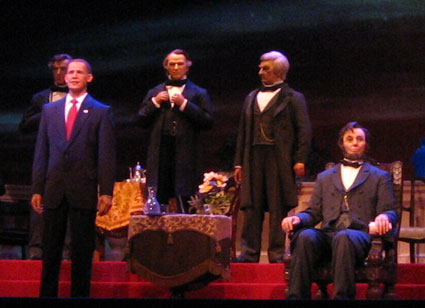 Heading to Walt Disney World on Thursday? Expect security to be tighter and traffic to be busier than usual as the President of the United States will be visiting Walt Disney World to give a speech on tourism. No better place for that then Orlando for that subject.

In fact, no better place than in front of Cinderella Castle in the Magic Kingdom, a giant icon for tourism. To make this work, Main Street and the hub will be closed until the speech is over and guests routed backstage from Town Square to Tomorrowland for access to the rest of the park. Once the speech is over and the President out of the park, things will return back to normal with the afternoon parade taking place a bit later than usual.

One wonders if President Obama will get a chance to visit the Hall of Presidents. If so, I believe he’ll be the first ever sitting President to see himself as an audio-animatronic in the show. Must be some sort of out-of-body experience. Alas the President is only scheduled to be on the ground in Orlando for a few hours, so my guess is that the HoP is not on the agenda.

To prepare for the President’s arrival Disney has shortened hours at the Magic Kingdom and changed the time for the parade. But they’ve also added extra magic hours at other parks, and a special fireworks show at Disney’s Hollywood Studios. Access to parking at the Contemporary Hotel will also be limited.

If you’re a resort guest you should get a letter explaining the changes.