Happy 2012 everyone! I don’t know a better way to kick off the new year then tuning into a new episode of Revenge! Especially when it features a mental breakdown of this guy: 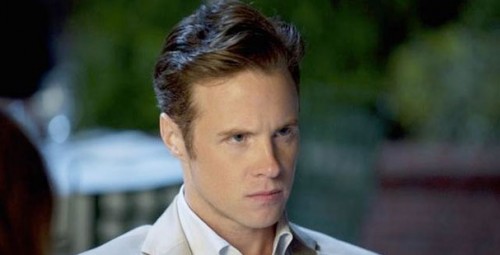 Yep. That’s Tyler. The episode opens with him holding a gun and about to shoot one of the bunch — Conrad, Ashley, Charlotte, Declan, Jack, Daniel, or Emily — at Daniel’s “casual” clambake birthday shindig on the beach. And because Revenge wouldn’t be the show it is without them, we get a flashback to two days earlier.

Pretty early into the episode we see why Tyler appears as the uninvited “guest” at the clambake. Conrad agrees to fire him (especially if Daniel returns to work) and Victoria is going to kick him out of his beloved pool house (because she will basically do anything Daniel wants right now). Emily steals the infamous animal-shaped USB and his prescription pill bottle. She calls his doctor and finds out that Tyler has been under investigation for several weeks now. A few minutes later, she’s watching Tyler trash the pool house. Because the USB is missing and he doesn’t have any pills yet.That first (or last) scene is making so much sense now. But every time I think this guy is about to lose it, he gains composure some how. And then loses it again. Apparently, Tyler is under the supervision of his brother, who is a big doctor. Nolan calls him and arranges to fly him to the Hamptons to pick up Tyler before he does something dangerous.(Where has this guy been?!) On top of everything else, Tyler’s beloved Daniel calls Tyler a “pathetic parasite” and threatens to call the police on him. Tyler flees.

I’m going to wait to get to the good part.

In this Tyler-centric episode, there were a few other storylines that kept popping up. Conrad and Victoria are trying to settle the details of their divorce. All she wants are a few paintings, a house, and Charlotte. But of course, Conrad wants full custody. Problem #1. Then there is the pre-nup. Victoria alleges she was pregnant and under “duress” when she signed it which makes the pre-nup null and void and she is entitled to half of Conrad’s money. Problem #2. Conrad, of course, is outraged. What actually happened is a little fuzzy to me. While this show enjoys taking its view on a twisty and turny journey, it has to work a little better at making some sense, even if it’s soap opera sense.

Victoria later admits to her lawyer (Huntley) that she was not pregnant nor did she miscarry. (Obviously.) I actually thought this was going to be a big confession about the identity’s of Charlotte’s father. But I guess admitting that would drudge up a lot of unnecessary drama for Victoria. Although I predict this will come up soon since Charlotte is key to this divorce proceeding.

As Huntley leaves, we do get an interesting flashback. Emily offering up the lawyer the box of evidence from her dad, who was MURDERED in prison. Had I missed this earlier? Did we know her father’s cause of death? Emily says he had all he needed to convict the Graysons. “But they got to you, didn’t they?”

We do get some borderline “warm” (for them) moments between Emily and Nolan, where she somewhat apologizes to him for her behavior and they are back to being a team again. Nolan has been tracking Tyler by his phone location and is able to help Emily out while she is running around stealing things from the pool house. Nice to see them chummy again. She even invites Nolan to the clambake since it’s for “family and friends”. Aww. Sweet moment. Though before Nolan can make it there, Tyler, of course, tricks him into thinking he is in San Fran when it is his phone that is actually there. Tyler cuts his arm with a knife and then ties him to a chair. Only to be found by… you guessed it Ty’s brother. But we’ll get back to that later. 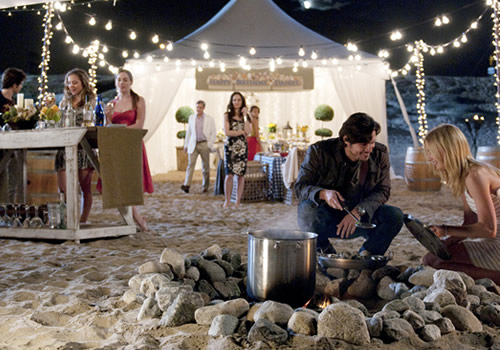 Jack Porter fans, revel in this moment you see right here. Because Jack and “Amanda” are helping out at the clambake. Priceless moment: when Victoria and Conrad are introduced to Amanda. It’s like no one knows what to do. (Victoria calls her “a pretty girl with cheap shoes and limited social graces.” Conrad comments that he knew someone like that once too… anyone else curious about Victoria’s past?)

But then there’s another moment when “Amanda” asks Jack if something is going on between him and Emily. I’m mortified to report that he tells her “I’ve been waiting for you all your life.” I mean, it’s getting a little embarrassing Jack. First you are going on and on about the “pain” you see in Amanda’s soul or whatever to Emily and now this? Ugh. Then you kiss her?

The whole thing is even more painful when it’s obvious Emily likes Jack, but she really does like Daniel too. She made him a scrapbook of poems and gave it to him privately. (Unlike his mom who scoffed over Emily’s idea and then gave Daniel a scrapbook of his own in front of the whole party.) And Daniel is just too good. Although it’s sort of ironic that now he is launching his own secret attack against his father in order to protect his mom. (Anyone else freaked out by her lovey vibes in this episode? I felt like she was treating him like a lover at one point.)

So we’ve come pretty full circle back to what will go down as the worst birthday party ever. Tyler breaks into Emily’s house during the festivities, looking for the USB and the gun. Emily and Tyler share some “friendly” words and soon she is bringing out Daniel’s birthday cake as Tyler follows her with a gun. He sure does ruin the big moment (I always hated that birthday song anyway) and he also blows our Daniel’s candles and decides to play everyone’s party favorite — truth or die! Yippee! He breaks the ice pretty quick by asking Conrad the real truth about David Clarke. Awkward. Because Emily is sitting right there and “Amanda” is on the other end of the table.

Knight in shining armor, brother Alex arrives just before Tyler can pull the trigger on Emily. Jack and Daniel tackle and punch him. And just like that bye bye Tyler. We also find out that Emily planted Frank’s wallet on Tyler. So now Tyler is number one in the investigation for Frank’s death. That girl is such a quick thinker.

The episode ends with a cover version of my wedding song. (Yes, my wedding song was Metallica’s Nothing Else Matters… but this version is sung by Lisette.) How bizarre is that? I think it might be a sign of something. I just haven’t figured it out yet. Emily and Daniel are making out. Nolan and Ashley are bonding over their poor choice of men. And “Amanda” thinks there may be more to the story about her father. Lawyer Huntley has also found a doctor that will sign off that Victoria miscarried. Happiness for everyone! …not really.

But gotta give it up for Ashton Holmes who played Tyler so well… I would not want to meet him on any beach or grocery store. Thumbs down for the scary music. Too much. Too loud. Too predictable. And a super fashionable mention of Emily’s clingy white number she wore to the clambake. I need that in my closet.

—
Revenge is on ABC at 10pm on Wednesday evenings. Check abc.com to catch up on the latest episodes.