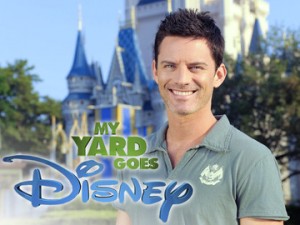 If your family dreams of a backyard makeover that is worthy of a Disney theme park and even bigger and better than last year’s My Yard Goes Disney creations, HGTV is looking for you. Last year they were looking exclusively for Orlando area homes. I submitted my backyard, which is basically a blank slate, but never heard anything. Although the application still states Orlando, Fla homes only, give it a try if you’re located elsewhere. It sounds like they’re widening their net for next season.

You have until January 30, 2012 to submit your compelling story, photos and video in the nationwide search for the perfect family to help create a fantasy-filled backyard inspired by Disney Parks. One lucky family will be selected to transform their outdoor living space into their own year-round recreational resort. If it’s someone reading this right now, I hope you’ll send photos.

Last season with the help of some Disney Imagineers, My Yard Goes Disney host Brandon Johnson helped homeowners create a Pirates of the Caribbean(R)-inspired makeover complete with a pirate ship, water cannons and a water battle station; a Disney’s Animal Kingdom(R) park-themed design with thatched-roof tree houses, a replica of a safari Jeep and a handcrafted fire pit. Other backyards featured a Tinkerbell-inspired oversized teapot playhouse, a Mickey Mouse-shaped swimming pool and a 200-foot long Disney Magic Kingdom park-inspired train.

If you think you have a compelling story and want to be the family bringing Disney Parks to your backyard, visit http://hgtv.com/MyYardGoesDisney before January 30, 2012 to find out how to submit your story, photos and/or a video to apply for your chance to receive one of this year’s amazing outdoor spaces based upon favorite Disney Parks inspirations.

The family selected for the makeover will be featured in the season finale of My Yard Goes Disney as one of the 11 Disney Parks-inspired makeovers in 2012. In addition, HGTV will take the magical inspiration inside as well in their special, My House Goes Disney, airing in March 2012.