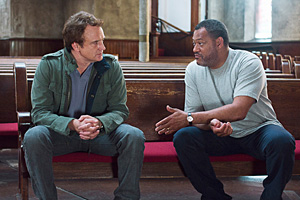 It’s been a long time since ABC had a regular series of Sunday Night Movies that actually meant anything. But I think this upcoming Hallmark movie is the exception. It has a powerhouse cast including Laurence Fishburne, Bradley Whitford, Anika Noni Rose, and Martin Landau Star and a screenplay from writer Mitch Albom.

Have a Little Faith, Albom’s first non-fiction book since Tuesdays with Morrie, was a No. 1 New York Times bestseller, remaining on the list for more than seven months, and was published in March in paperback.

Emmy and Tony Award winner and Oscar nominee Laurence Fishburne plays Henry Covington a Detroit preacher who overcame – along with his wife, Annette, played by Tony Award winner Anika Noni Rose, a life mired in drugs and crime. Mitch Albom, portrayed in the movie by Bradley Whitfor, met the reverend-in-recovery when he wrote newspaper columns about homeless people and homeless shelters. Covington’s I Am My Brother’s Keeper Church provided food and a place — on the church floor — where homeless people could sleep.

The other central character in Albom’s book and movie is New Jersey Rabbi Albert Lewis, played by Academy Award winner Martin Landau. “The Reb,” as Albom calls him, asks Albom – who had briefly attended the rabbi’s synagogue as a child — to write his eulogy.

On the surface, these two larger-than-life characters, the charismatic African-American preacher and the feisty, funny rabbi, could hardly be more different. But they each in their own way profoundly affect the writer. It’s a story about life’s purpose – losing belief and finding it again – and about the divine spark inside all of us. One man’s journey is really everyone’s story.