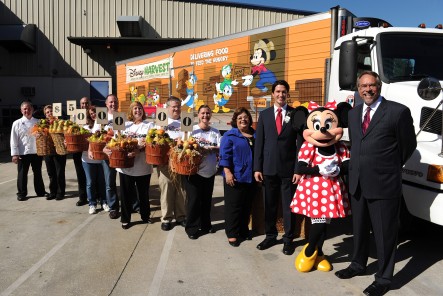 According to Second Harvest, the need for additional space at the organization’s headquarters is critical in reaching more children who are hungry in the community.

“The harsh reality is that the demand for our services continues to grow, and our infrastructure must grow with it,” said Dave Krepcho president and CEO of Second Harvest. “Capacity is king in the world of hunger relief, and a new facility will provide the ability to more than double our current distribution over the next 10-15 years. The gift from Walt Disney World Resort will directly help many thousands of Central Floridians.”

Second Harvest Food Bank will more than triple its cooler and freezer capacities in the new building, enabling the organization to accept and deliver thousands of pounds of additional food when then facility opens.

One way in which Second Harvest collects food for donation is the Disney Harvest program, in which excess prepared and unserved food from locations throughout Walt Disney World Resort are collected and delivered to the food bank five days a week. Since 1991, Walt Disney World Resort has donated several million pounds of food to the Second Harvest Food Bank as part of this program.

previousTown of Celebration, Fl Celebrates 15 Years With Founders Day, Taste of Celebration
nextKermit and Animal from the Muppets get their own adidas Kicks.