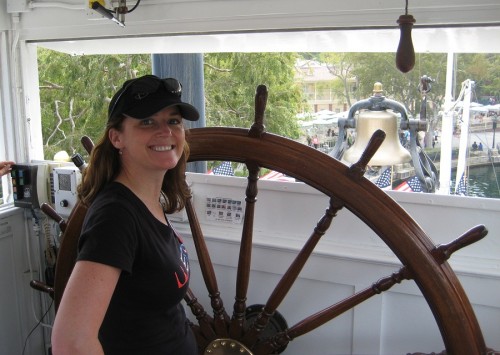 As you cross the threshold between Adventureland and New Orleans Square at Disneyland, you’ve undoubtedly seen the iconic Mark Twain Riverboat chugging along the Rivers of America, puffing white steam into the blue sky as she takes guests on a delightful twelve-minute journey through yesteryear. What you may not know, is that Park Guests have the opportunity to pilot the ship, just like Steamboat Willie does in Fantasmic!

For a chance at becoming the captain of the ship, simply ask one of the dockside Cast Members in the queue. (Planning note: if you have a large party, not all Guests may be able to visit the wheelhouse in one trip.) If another Guest has already asked, you may have to wait for the next sailing of the Mark Twain, but it’s worth the short wait to gain passage into the exclusive wheelhouse, which was frequently visited by Walt Disney himself (you’ll see photo proof in the Captain’s quarters).

When your turn comes, you’ll be escorted by a Cast Member up several flights of narrow, steep stairs into the wheelhouse, where you’ll have breathtaking views of the surrounding lands. But you’re not just there to spectate, you’ll actually have a job to do, whether it’s manning the ginormous wheel to ensure the ship doesn’t run aground or taking charge of the whistle and bell system to signal your whereabouts to the Sailing Ship Columbia and others along the Rivers of America. As you wave hello to guests on Tom Sawyer’s Island, be sure to chat with your host Cast Member, who will undoubtedly point out details and delights that you may not notice from the ship’s other decks (ask about the hidden Mickey in the “rapids” and why Disneyland welcomes ducks and felines).

When you make the final turn back to the dock, you’ll have a chance to sign the wheelhouse guestbook and will be presented with a personalized riverboat pilot’s license, signed by none other than Walt Disney. Now, how cool will it be to add that to your resume or Disneyland scrapbook?!