Charlie’s Angels Go To Jail, Do Not Pass Go

Editor: Alas, Charlie’s Angels has been cancelled by ABC. The network will burn the rest of the episodes in the can, but I guess the world wasn’t ready for this reboot. I want to thank Marshal for his thankless job recapping the show. This will probably be the last recap of the show for this blog. I hope we can find some other show for Marshal to write about. 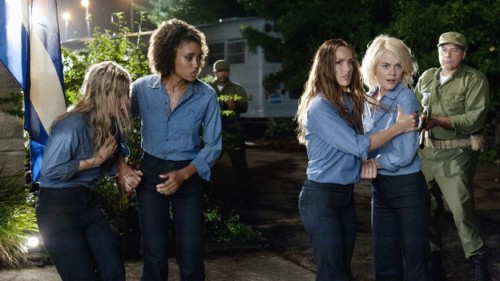 This week’s episode included the world’s fastest case explanation…ever! We immediately head to Cuba, where the Angels are trying to find a woman who was kidnapped three weeks prior and is now locked up in a prison in the area. Charlie has an extremely tight time crunch though; they only have 24 hours to get her back into the USA. Darn You Time Crunches! They pretend to be tourists as the check in to their hotel…but hold on…the person at the desk has pulled out 3 bags of cocaine…and is placing it in the angel’s bags! Oh No you didn’t! Charlie will kill you sir!

So, of course, they go to jail (if you didn’t see that coming…you need to take Television 101 over) and have a “plan” to get her out. They start a fight during lunch and Eve and Kate are sent to “The Hole,” where the kidnapped girl is also located…AH HA! Abby escapes her jail cell, the girls meet up and walk out of the building…only to get caught. Earlier, Bosley meets up with someone from his past, a CIA agent named Samantha, who was this close to catching him and locking him up…but he got away. Now, she is on Bosley’s side and helping them throughout the case.

Time for my small synopsis! American Guy takes girls…they are now prostitutes! Some seducing goes down, tons of guns, with them all occasionally moving there gun towards a different person, all girls escape…except 1 Angel! Trading of women, abuse abuse abuse…and that’s where I stop. Now, the best part of all of my recaps…

Top 5 Things We Learned from Episode 4

So the ratings aren’t very good, they are getting lower by the episode. I really enjoy the show, so that stinks. On the other hand though a GREAT cliffhanger-esque “thing” was given at the end of the episode, so hopefully we find out more soon. Remember to watch, Thursday’s at 8/7c on ABC! (Just to let everyone know, I just started a Tumblr, so follow me magic0214.tumblr.com …THANKS!

4 thoughts on “Charlie’s Angels Go To Jail, Do Not Pass Go”