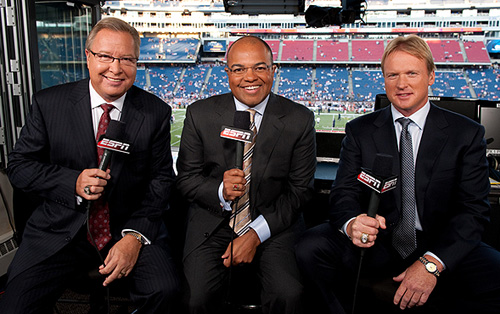 The extensive package of NFL rights will fuel the continued growth of ESPN year-round, boosting its core television business while at the same time supporting the company’s “best available screen” strategy with NFL programs on TV, online and on mobile devices via authentication and digital rights. Outside the U.S., ESPN will televise MNF and other regular season games, playoffs, and the Super Bowl in 30 million households in 144 countries and territories across five continents, including Brazil, the Caribbean, Africa, Middle East, Israel, Australia-New Zealand, and Continental Europe. The agreement also provides the NFL with an option to air a postseason Wild Card playoff game on ESPN should the NFL decide to do so.

An iconic series in the history of American television, Monday Night Football debuted in 1970. After a 36-year run on ABC, the series moved to ESPN in 2006 as part of a landmark eight-year agreement. During the past five seasons, ESPN’s MNF has become the most-watched series in cable television history, registering eight of cable’s 10 all-time biggest household audiences and 16 of the top 20 (excluding breaking news). In 2010, MNF ranked eighth among all primetime programs (broadcast or cable), averaging 10.5 million homes (14.7 million viewers), an unprecedented achievement for a cable television property. In addition, an estimated 140 million people viewed MNF and NFL studio programming on ESPN/ESPN2 over the course of the 2010 NFL season

ESPN’s significantly-enhanced NFL rights package for the extension will include:

The long-term agreement also ensures that Monday Night Football will celebrate its 50th anniversary season on ESPN in 2020.