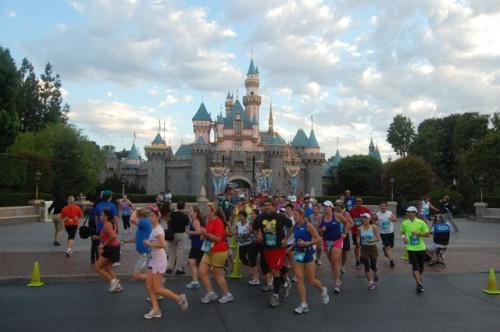 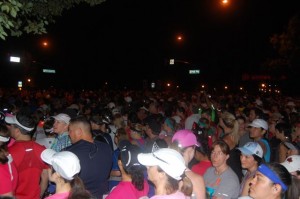 The Disneyland Half Marathon crowd started arriving bright and early this morning, as 15,000 runners made their way to the park for the 6 AM start time. For it being so early, though, there clearly was no lack of energy! These dedicated athletes carried an overwhelming buzz of excitement with them — and why wouldn’t they be excited? They would soon be running a 13.1 mile path through California Adventure, Disneyland, Anaheim Stadium, and finally, Downtown Disney, some of the best marathon-running scenery one could ask for! 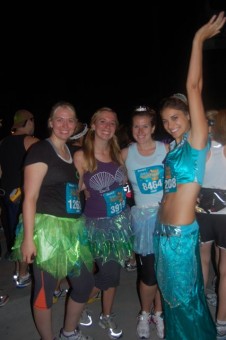 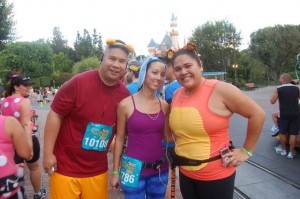 You know, one of my favorite things about Disney fans is their pride. There were SO many people dressed up as a wide variety of characters, including (but not limited to): Mickey and Minnie Mouse, Winnie the Pooh and friends, the Princesses, Indiana Jones, Pirates of the Caribbean, Nemo, The Incredibles, Buzz Lightyear, and Tinkerbell. My personal favorites were a trio that dressed up in Mrs. Potts, Chip, and Lumiere costumes – their suits were impractical, but they didn’t seem to mind!

Even just as a stander-by, it was really easy to feel the good vibes as the race was about to start. The charismatic MC and loud music made me forget that the sun hadn’t even risen yet. My excitement reached it’s peak, though, when Mickey and Minnie Mouse, the “chairpersons” of the event, came out a few minutes before 6 to pump everyone up even more. After a beautiful rendition of the “Star Spangled Banner” by an American soldier (complete with fireworks, naturally), the countdown began, leaving only a few final moments of anticipation. 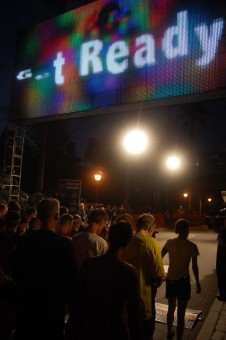 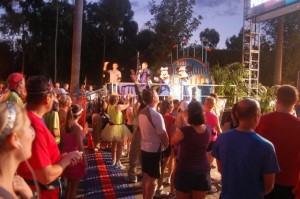 And then they were off! Led by a small group of handicapped and all-star athletes, the race began in waves. Runners were released in corrals, which helped keep the crowds down and the energy high. They were greeted by a multitude of characters and photo ops along the track, which offered them time to enjoy the scenery and catch their breath. I caught up with the runners again in Disneyland (mile 2 started at the beginning of Main St.), and even by that point, their spirits were still soaring! The park looked beautiful; the sun had just risen and was barely creeping out over Tomorrowland. Quite a magical experience, indeed. 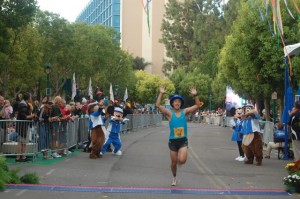 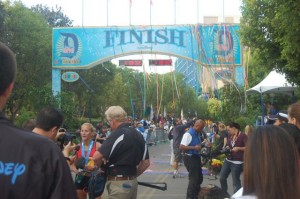 After a short hour, the runners started to approach the finish line behind Downtown Disney. They were greeted by Mickey, Minnie, Chip, and Dale, and later Goofy and Pluto, all dressed in their athletic gear, and a supportive MC cheering them each on personally. I wasn’t able to catch up with the 1st Place winner, Humberto Rojas, who finished in just 1:08:14. However, I was lucky enough to chat briefly with professional crossrunner Rachel Booth, the 1st Place female. Finishing with an impressive time of 1:18:01, she said this was exactly her goal for the race and even showed me the time markers she had written on her hand beforehand to keep her on track. Traveling from Kansas for the event, Rachel was using the Disneyland Half-Marathon as a practice race, as she is trying out for the Olympics. Good luck to you, Rachel!

I only stayed until the runners started flowing in consistently (around 7:45 am), which was conveniently when my caffeine started to wear off. By the time I left, it didn’t look like there had been many injuries, and I hope it stayed that way. In all, even though I didn’t get to participate in the event, I had a fantastic time! It’s a great way to make use of the fantastic space that the Disneyland property has to offer, and an exciting means of promoting health and fitness. After seeing the event as an outsider today, I hope that next year, I will get the chance to actually sign up and run!

See more of my pictures from the event here.

Watch my video from the event:

Have you ever run in a Disney Marathon or Half-Marathon?