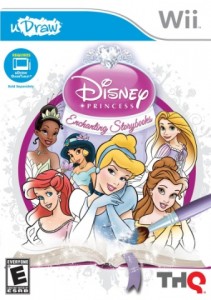 If you have ever purchased a Disney Princess game, you already know they are typically made for very young audiences. This fall, the iconic ladies will be featured again in a video game called Disney Princesses: Enchanting Storybooks.

Created by THQ, the game will be available November 1 on the Wii (with the uDraw GameTablet) and Nintendo DS, and will essentially be exactly what the name suggests. Based off of interactive stylus-based activities, the game will include number-painting pages, painting games, and coloring pages that will narrate their respective stories aloud. Players will also meet a new fairy named Opal, who will play alongside classic characters, like Ariel, Belle, and Rapunzel. According to Martin Good, Executive Vice President of PlayTHQ, the company’s division for kids games,

“The Disney Princess characters are favorites of little girls everywhere, and our goal has been to make a game for them that takes advantage of the special capabilities of the uDraw GameTablet…Whether they venture under the sea or into the bayou, we’re excited that the uDraw will allow generations of fans to experience these classic Disney princesses.”

To me, it sounds like this is basically a glorified coloring book, which could be pretty fun for a young girl, especially when accompanied by the Disney Princesses. However, as a college student on a pretty tight budget, I could foresee having trouble justifying the price (Wii-$29.99, Nintendo- $19.99), especially because I have personally found the princess games to be fairly dull. Having said that, the game is worth considering for any young girl aspiring to be a Disney princess. If you are interested in more information, read the product press release or watch the game trailer below!