In a move that is sure to bolster the United States Post Office’s failing bottom line, the chief creative officer of Walt Disney Studios and Pixar Animation Studios, John Lasseter, and deputy postmaster general, Ronald Stroman, unveiled the USPS Send a Hello Forever stamp series yesterday at the ultimate Disney fan event, D23 Expo. Available today at usps.com, the new Send a Hello Forever stamps feature the characters of five popular movies created by Disney/Pixar Animation Studios: Buzz Lightyear and two of the green, three-eyed aliens from Toy Story; Lightning McQueen and Mater from Cars; Remy the rat and Linguini from Ratatouille; the robot Wall-E from Wall-E; and Carl Fredricksen and Dug from Up.

“It is an exciting honor to haPixar characters depicted on U.S. stamps,” said John Lasseter, chief creative officer, Walt Disney Studios and Pixar Animation Studios. “The characters from these stories that are on the Send a Hello Forever stamps hold a special place in the hearts of kids and families alike, and now they will be beloved in a new way, as they’ll be used when sending special words to one-another, which is incredible.” 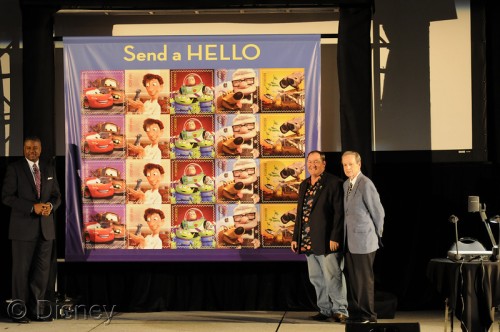