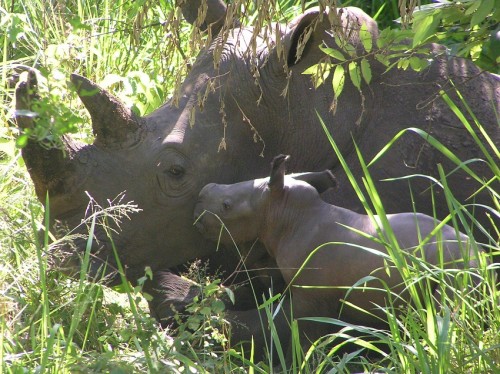 In 2006, Disney’s Animal Kingdom made a promise to the future by sending two white rhinos to Uganda to help re-establish a white rhino population that had been extinct in the region since 1982. That promise continued to pay off today with the birth of ‘Malaika’, the first female white rhino born in Uganda in more than 30 years and the second calf born since 2009.

Animal care experts from the Rhino Fund Uganda team have been closely monitoring the mother Nande and Malaika as they bond. Nande is a second-time mother. She gave birth to her first baby, a male calf, in 2009.

Disney’s commitment to conservation and rhinos goes beyond this first-ever rhino transfer. The Walt Disney Company Foundation and the Disney Worldwide Conservation Fund have supported more than $940,000 in rhino protection and research projects in partnership with non-profit organizations throughout the world. Guests can see both white and black rhinos on the Kilimanjaro Safaris attraction.

Disney’s Animal Kingdom is accredited by the Association of Zoos and Aquariums (AZA). With its more than 200 accredited members, AZA is a leader in global wildlife conservation and a link to helping animals in their native habitats.